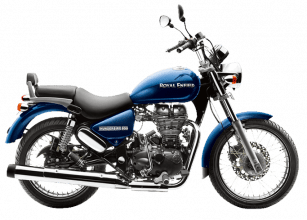 Royal Enfield really hit it out of the park with this one. With the launch of the UC Engine in 2009, the firm needed a new model that could do justice to the capabilities of the motor. Enter the Thunderbird. Royal Enfield has been selling the Thunderbird since 2002, but it only received its current powertrain in 2009 and a new design in 2012.

The Royal Enfield Thunderbird 500 instantly sets itself apart from other offerings in the company’s stable. The wide, swept-back handlebars, deep bucket seat, LED taillamp and headlamp inserts, twin chrome dials, and the huge fuel tank that does not look out of place on the bike- Royal Enfield has pulled off another timeless design.

The Thunderbird 500 is built for easy cruising on the highways. With its relaxed seating stance, spacious ergonomics, large fuel capacity, and planted dynamics, there can be no better companion for the open roads than this. You can also rest assured that the Thunderbird mark its presence everywhere it goes with that signature five-strake LED taillamp and the projector headlamp with a round LED surround.

The suspension of the Thunderbird is one of its key highlights. While it works overtime to absorb all road undulations and irregularities, none of the discomfort makes its way to the rider, making for a plush experience. Head out on a relaxed, unhurried cruise on the highways, and you will find the Royal Enfield Thunderbird 500 is a machine built for the task.

The Thunderbird 500 has a fuel tank capacity of 20 litres. It weighs 197kg (dry). In addition to this, the bike also comes with an Anti-lock Braking System (ABS).