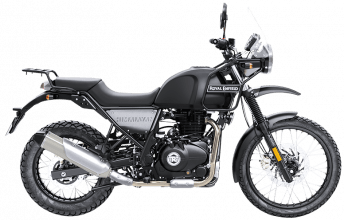 The Himalayan rewrote the fate of entry-level adventure tourers with its arrival. The styling on the Himalayan reflects the very ethos on which Royal Enfield is based upon.

The bike holds a fuel tank capacity of 15 litres and weighs 191kgs. The bike has an impressive ground clearance of 220mm and also gets a carburettor. The suspension duties on the bike are handled by telescopic forks in front and monoshock absorbers at the rear, this makes Himalayan the first Royal Enfield to feature mono-shock suspension.

The instrument cluster which even features a compass is large and easily readable.

The power comes from a 411cc single-cylinder air-cooled engine with overhead cams belting out a top power of 24.5bhp and a peak torque of 32Nm. Transmission duties are handled by a five-speed gearbox. The multiple spoke 21-inch tyre in front and 17-inch tyre at the rear does not just offer good grip on the road but they also aid towards maintaining balance and stability while on the move.

The 2019 Royal Enfield Himalayan is powered by a 411-cc 4-stroke, Single Cylinder engine that produces 24.5bhp and 32Nm of torque through a 5 -Speed transmission.

The Himalayan has a fuel tank capacity of 15 litres. It weighs 191kg (dry). In addition to this, the bike also comes with an Anti-lock Braking System (ABS).

Prices in the UAE for the Himalayan starts at AED 17,000.