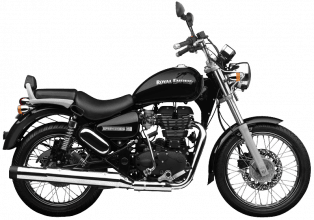 For its younger iteration of the Thunderbird 500, RE uses the same 346cc unit construction engine which powers all the 350cc bikes in its portfolio. Cosmetically, the bike has undergone a visible change as it gets a teardrop fuel tank, digital instrument cluster, LED tail light etc.  Power is offered by the 4-stroke, Twinspark single cylinder engine.

Power comes from a 346cc, air-cooled, single cylinder engine yielding 19.80bhp at 5,250 RPM. There is enough torque for this bulky motorcycle which develops 28 Nm at 4000 RPM. Weighing 195 kg, Thunderbird 350 has a relatively low power to weight ratio which affects the performance.

Glaring the rider in the eye is the twin-pod instrument cluster that features an analogue speedometer, odometer, trip meter and it also shows low average economy. Other features aboard are fuel warning indicator, fuel gauge, low oil indicator, low battery indicator, engine kill switch and a grab rail for the pillion. Up front, a projection type headlight is fitted and rear is ornate with LED tail lamp.

The 2019 Royal Enfield Thunderbird 350 is powered by a 346-cc 4-stroke, Single Cylinder engine that produces 19.8bhp and 28Nm of torque through a 5 -Speed transmission. And is capable of reaching a top-speed of 130kph.

The Thunderbird 350 has a fuel tank capacity of 20 litres. It weighs 195kg (dry). In addition to this, the bike also comes with an Anti-lock Braking System (ABS).