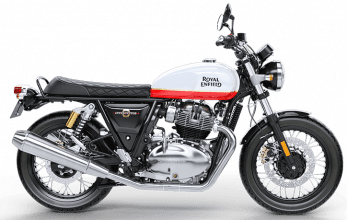 Royal Enfield’s first all-new product since 2009, the Interceptor 650 Twin is a masterpiece in many respects. For starters, the design is impeccable: this is just how classic roadsters should look like. The peanut-shaped tank, flat seat, visible subframe, conventional forks up front and twin shocks out back, paired with the big 47hp/52Nm 648cc parallel-twin motor breathing through two exhausts: It’s all good. Oh, and the engine is air/oil-cooled.

This is where the classic bits end and modern bits take over. You get ABS, a slip-and-assist clutch, premium materials and craftsmanship, and top-notch build quality. The Interceptor 650 Twin not only undercuts rivals with similar specifications, it actually manages to redefine how much a manufacturer can offer in the midsize motorcycle segment for such a competitive price.

What makes the Interceptor a unique motorcycle? It takes its moniker after its namesake that Royal Enfield sold way back in 1960. The design of the new Interceptor also echoes the easy-going bikes of the sixties. Yet it is thoroughly modern in terms of equipment. But then again, its laidback nature and performance has you smiling ear-to-ear, wishing for the good old monochrome days to come back. The monochrome days are long gone, but you can get your Royal Enfield Interceptor in chrome!

The 2019 Royal Enfield Interceptor 650 is powered by a 648-cc 4-stroke, Parallel Twin engine that produces 47bhp and 52Nm of torque through a 6-Speed transmission. And is capable of reaching a top-speed of 160kph.

The Interceptor 650 has a fuel tank capacity of 13.7 litres. It weighs 202kg (dry). In addition to this, the bike also comes with an Anti-lock Braking System (ABS).