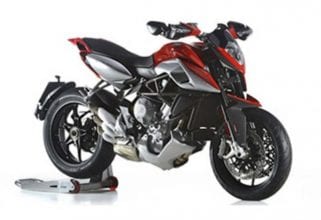 The engine block is of the closed-deck shell-cast type with integral bore liners. Liquid coolant and lubrication circuits are incorporated inside the engine, as are the relative pumps, significantly reducing size and sculpting that high-class style quintessential to every MV Agusta.

The 2016 MV Agusta Rivale 800 EAS ABS is powered by a 798-cc In-line three, four-stroke engine that produces 125bhp and 84Nm of torque through a 6-speed transmission. And is capable of reaching a top-speed of 245kph.

It weighs 178kg (dry). In addition to this, the bike also comes with an Anti-lock Braking System (ABS).