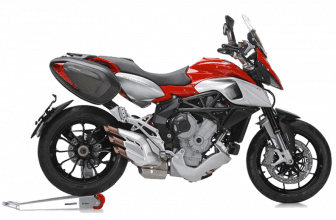 The Turismo Veloce stands out immediately as an MV Agusta, despite the fact that it expresses a stylistic concept which is uncommon for the brand from Schiranna. The overall compact sensation provided by the size of the three-cylinder engine, further reduced by the hydraulic clutch control, is expressed in extremely well balanced volumes on the two axles, even with the side panniers mounted.

The 2016 MV Agusta Turismo Veloce 800 Lusso is powered by a 798-cc In-line three, four-stroke engine that produces 110bhp and 83Nm of torque through a 6-speed transmission. And is capable of reaching a top-speed of 230kph.

The Turismo Veloce 800 Lusso has a fuel tank capacity of 22 litres. It weighs 192kg (dry). In addition to this, the bike also comes with an Anti-lock Braking System (ABS).