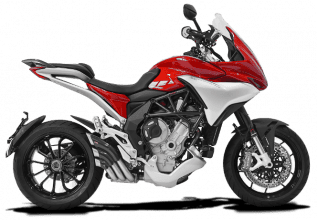 The semi-fairing, with a clean and tidy design, joins the tank to the top fairing which has an adjustable windshield (up to 60 mm). Inside it space for two glove-boxes was found which snap closed, whereas the hand guards have built-in turn indicators. The two saddle portions are particularly refined and comfortable, with the passenger seating area perforated and sporting exposed stitching.

The 2017 MV Agusta Turismo Veloce 800 Lusso is powered by a 798-cc In-line three, four-stroke engine that produces 110bhp and 83Nm of torque through a 6-speed transmission. And is capable of reaching a top-speed of 230kph.

The Turismo Veloce 800 Lusso has a fuel tank capacity of 22 litres. It weighs 192kg (dry). In addition to this, the bike also comes with an Anti-lock Braking System (ABS).