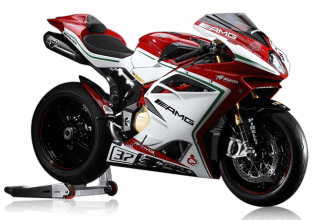 As with Camier’s F4, the F4 RC can be both enthralling and efficient; the most comprehensive package amongst Hypersports. Elegant and simple, the F4 RC is instantly recognizable with a stunning red and white graphic base as that used on the official version, including sponsor logos.

The 2017 MV Agusta F4 RC is powered by a 998-cc In-line four, four-stroke engine that produces 212bhp and 115Nm of torque through a 6-speed transmission. And is capable of reaching a top-speed of 302kph.

The F4 RC has a fuel tank capacity of 17 litres. It weighs 175kg (dry). In addition to this, the bike also comes with an Anti-lock Braking System (ABS).