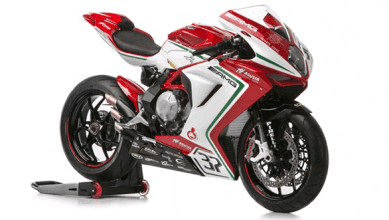 The ultra-light unit (it weighs only 52 kg) is packed with radical technological features such as a closed deck shell-cast crankcase with integral bores, the MVICS system and the adoption of titanium intake and exhaust valves, slipper clutch and above all a counter-rotating crankshaft, an idea taken from MotoGP to reduce inertia during direction changes – improving handling and engine balance.