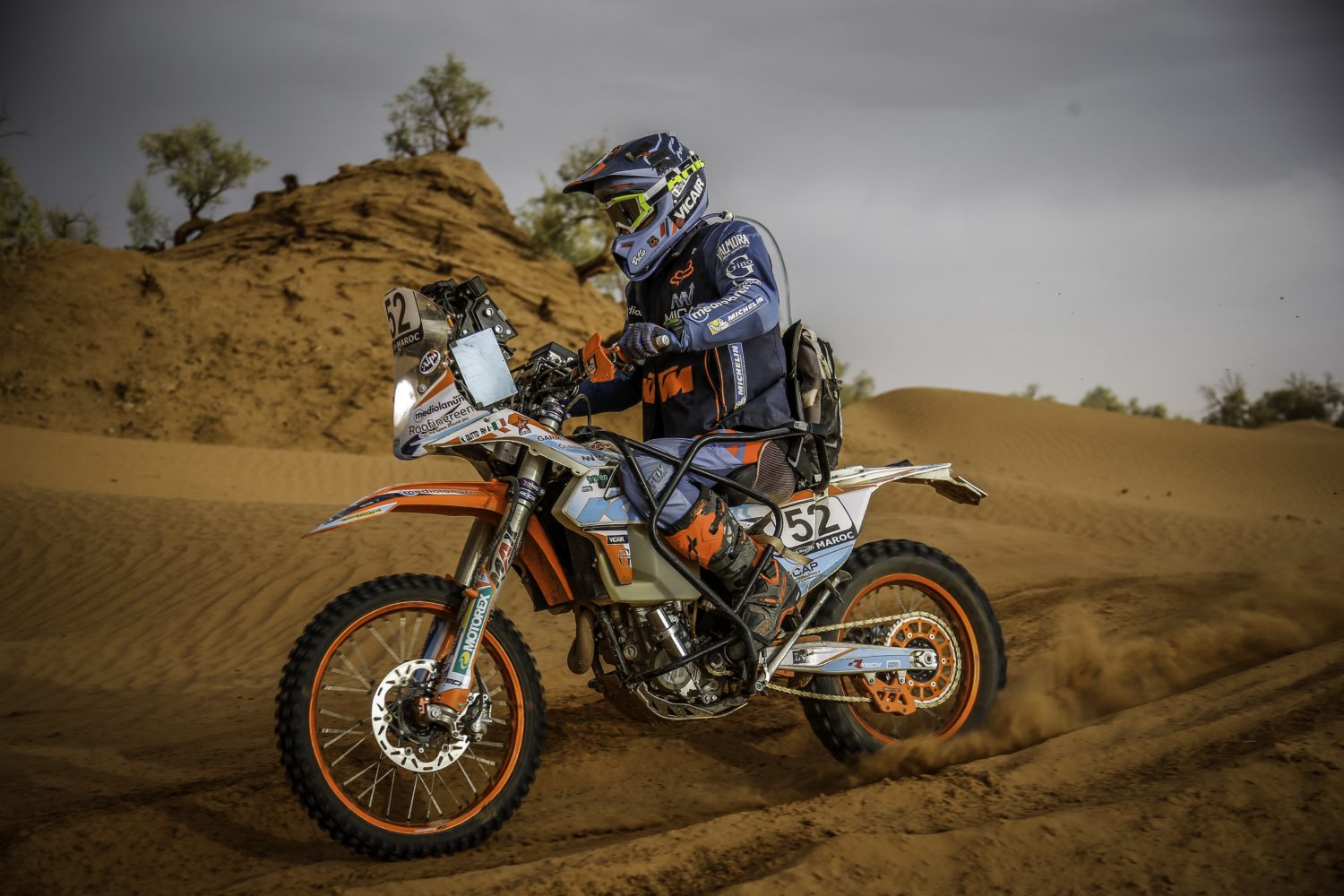 It is January. 2019 Rally Dakar is on. Today is a rest day for the racers. Amongst the many brave, insane men and women camped out in Arequipa, Peru, is one man who proves that sheer will and determination are the only two things you need to succeed. Nicola Dutto is the world’s first paraplegic racer to enter Dakar.

Rally Dakar is one race that tests every inch of your mettle: physically as well as mentally. Despite the fact that the toughest race on the planet claims its pound of flesh every year, whether spectator or racer, people still make the annual pilgrimage to the South Americas.

Nicola Dutto also had that dream of entering Dakar which was seemingly snatched away from him following his horrible crash at the Italian Baja in March 2010. The accident left him without sensation below the navel. His balance was so badly affected by the crash, Dutto had to struggle through everyday activities like putting on a T-shirt. A majority of people would assume his career in motorsports was over- at least the two-wheeled type. 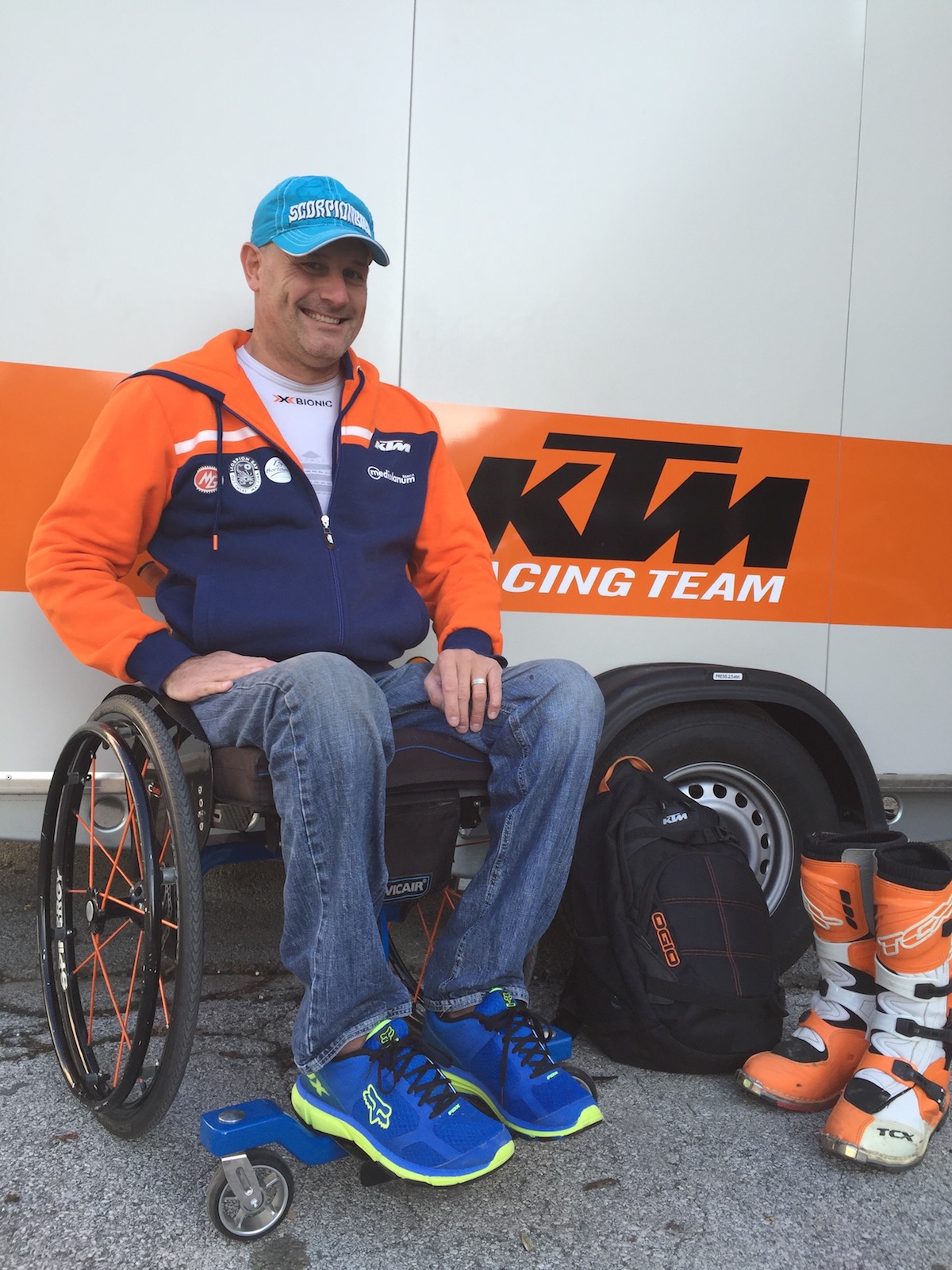 A man of immeasurable fortitude and will: Nicola Dutto

However, in November 2011, Dutto shocked the world by attempting a return to racing. Just nine months after getting a discharge and taking up an intensive rehab routine, he wanted to try his hand at racing again to see if he had still got it. Although he was not yet ready to race motorcycles, Dutto challenged himself to race something other than a two-wheeler.

So it happened that he piloted a four-wheeled buggy at the Baja 1000, putting his mind and body to the test. Though he was not able to finish due to mechanical problems, Dutto figured out two things: he was ready to race competitively, and four-wheelers just did not agree with him.

After months of support from friends, wife Elena, and manufacturers willing to make bespoke components for him, Dutto was finally ready to get back to the world he had unwillingly left behind for a short time. Less than a year following the Baja 1000, the gritty Italian was back on his motorcycle. 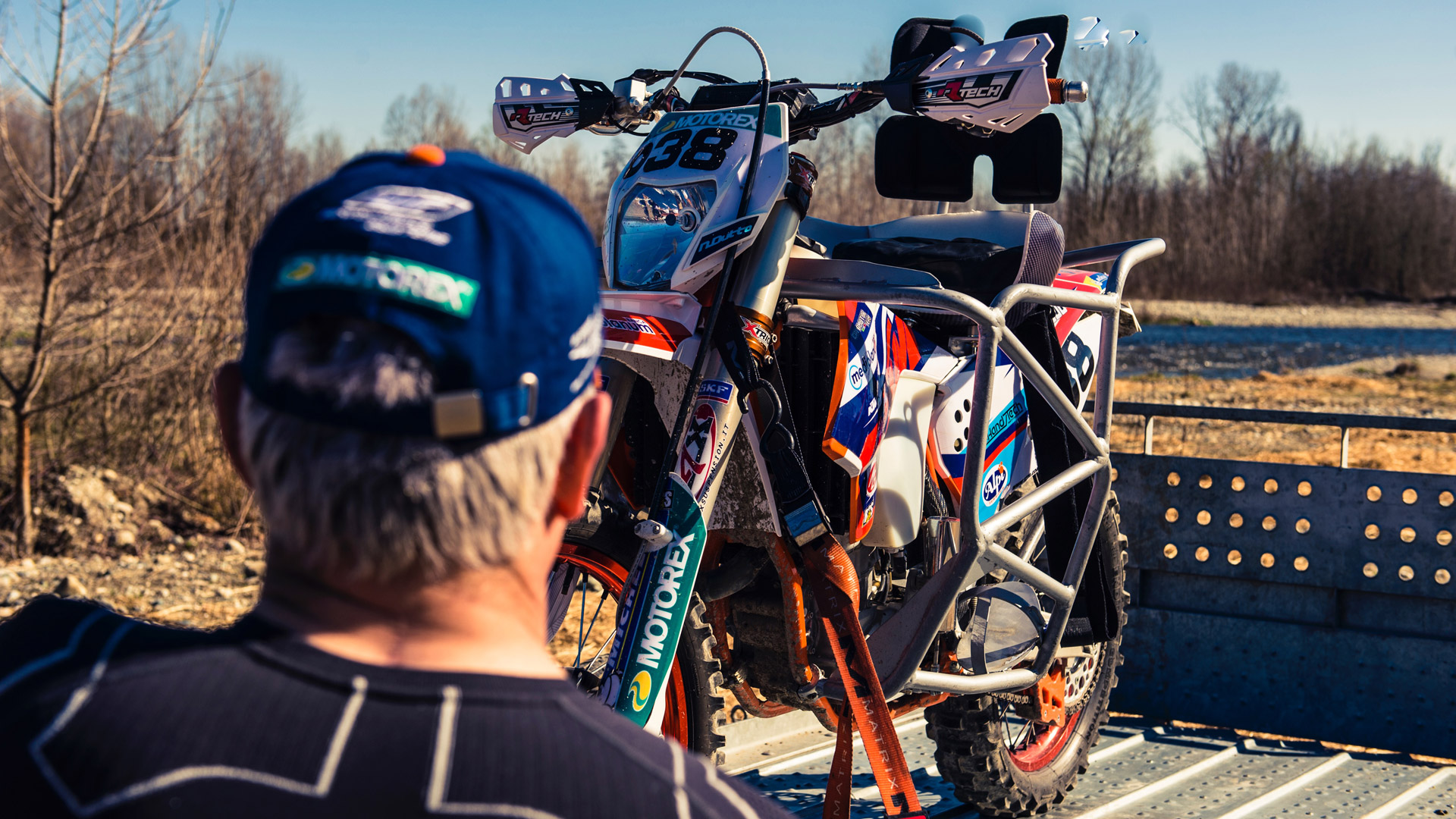 The road to Dakar has been a long, hard one. But Dutto never lost sight of his goal.

His first stint was at the Baja Aragon in Spain. Competing in the 500km raid where all sorts of vehicles compete was not an easy decision, and Dutto left the starting line a little hesitant. But he managed to finish 24th. This gave him hope and put him on the long, hard road to Dakar.

Rally Dakar just cannot be approached lightly, even by those in full possession of their faculties. Dutto had to make a big shift in everything. His fitness, his motorcycle, his sponsors; everything needed to be overhauled and modified to fit his new condition.

First up was his motorcycle: a KTM 450 EXC-F. The Austrian Enduro machine wears a lot of modifications to suit Dutto’s needs. For starters, there is a comprehensive roll cage on both its sides to secure Dutto’s legs, along with a three-point harness. The rear brake now rests on the handlebar. 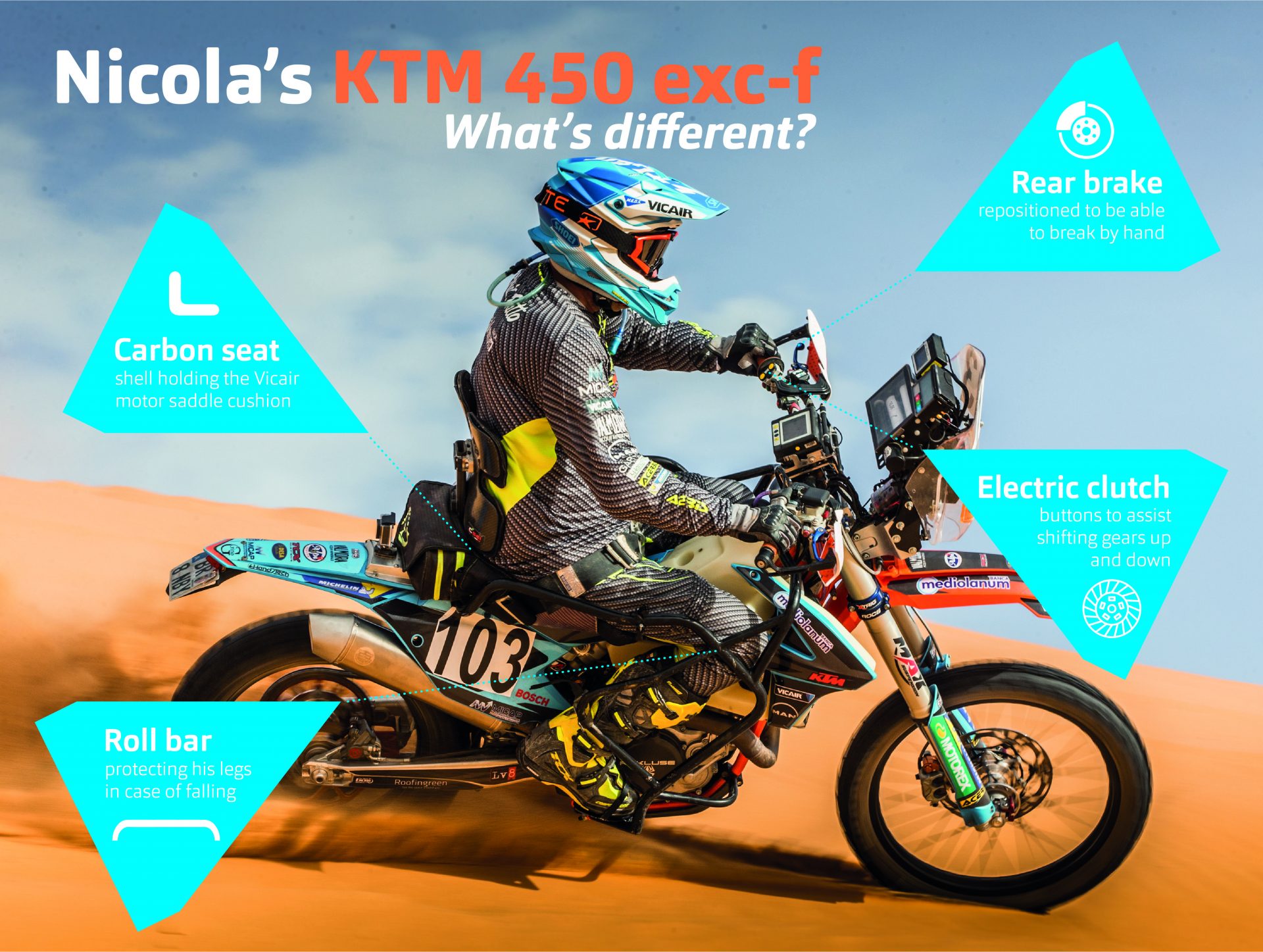 A purpose-built machine designed around its Italian racer.

Perhaps the most significant modification to the bike is a new carbon seat. Rally racers spend a lot of time standing on the pegs as they steer their bikes over harsh terrain, allowing their legs to absorb the shocks. Dutto would be sitting through the entire race, risking hurting his damaged bones further.

This is where Vicair stepped in. Vicair is renowned for designing specialty wheelchair seats and is one of Dutto’s sponsors for 2019 Rally Dakar. Dutto and Vicair CEO Max Rogmans met in 2013 and began developing a competition-spec motorbike saddle. The end product is a cushion composed of several air cells. Even if one of the cells popped during the race, the entire seat wouldn’t deflate.

Nicola Dutto was convinced 2019 was his year. He had a bespoke bike. He had the practice. He also had been steadily training to improve his upper body strength and balance. It was finally time to take on the biggest challenge in his life: Dakar. The 2019 edition of the rally is the most challenging yet. 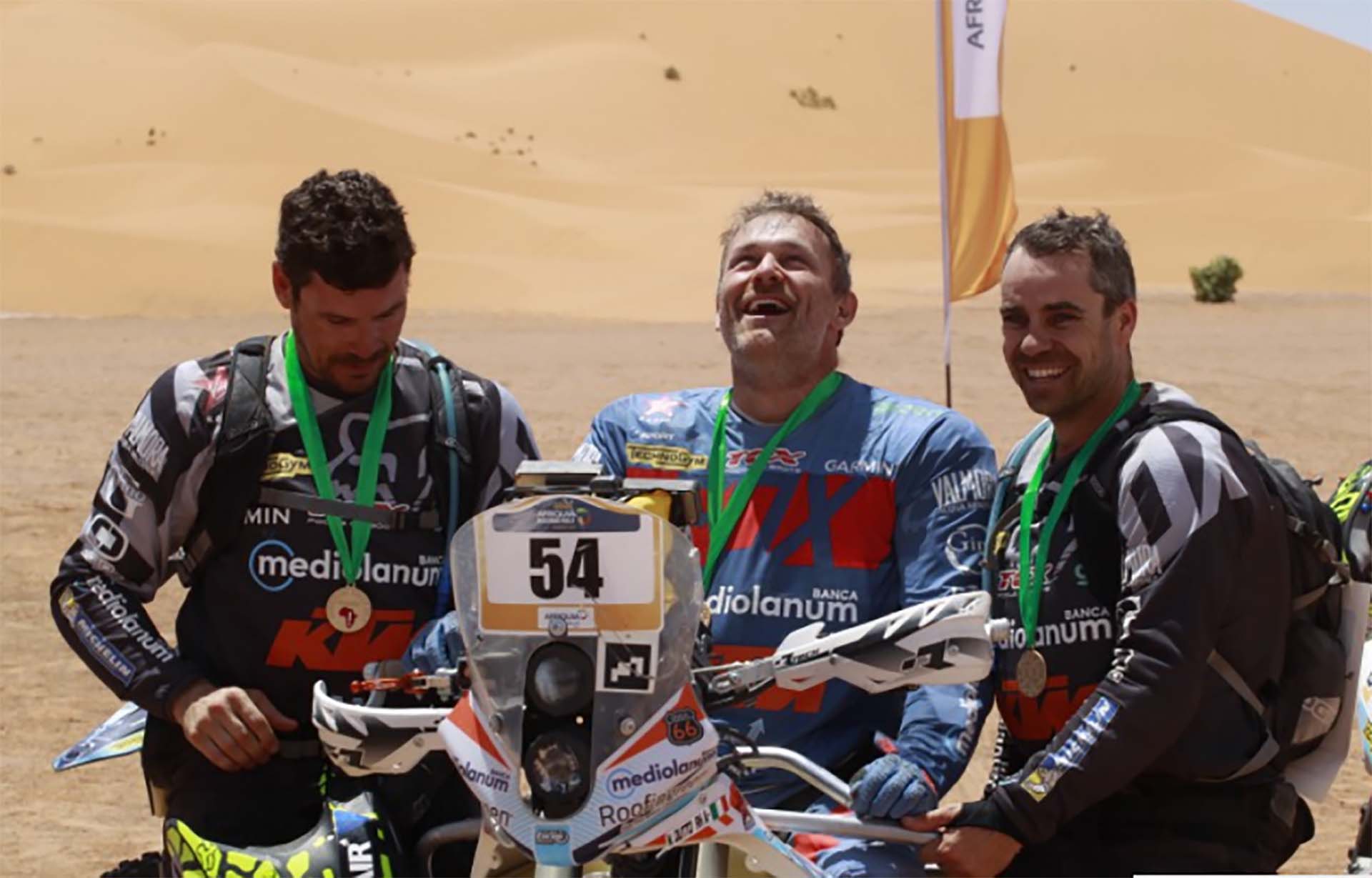 A living example of a human spirit unbound by its physical limitations.

But Dutto is unfazed. In his own words: “I will compete with a KTM equipped with a special roll-bar to protect my legs, that I have developed, and on the handlebar I have the buttons for the rear and front brake, the change gear and to accelerate. I’m actually tied to the bike. I won’t be alone. I will share this adventure with 3 other drivers who will escort me one riding in front, one on each side and one behind me.

“It’s a team work. We have competed together the Dakar Series as the Merzouga Rally and the Morocco Rally. I take the start motivated to give the maximum. I’m fascinated by the idea to spend many hours on the bike pushing forward my physical and mental limits.

“Scared? Nothing scares me.”

As of now, while the Dakar circus is resting at Arequipa, Dutto and his “ghost” riders are out of the race. The problem is with the machines, the men are unbroken. Despite a frustrating end to Dakar this year, one cannot help but respect the immense determination of the 48-year-old Italian. In a sport traditionally designed for able-bodied people, this man has shown what the human body is capable of when fueled with determination. 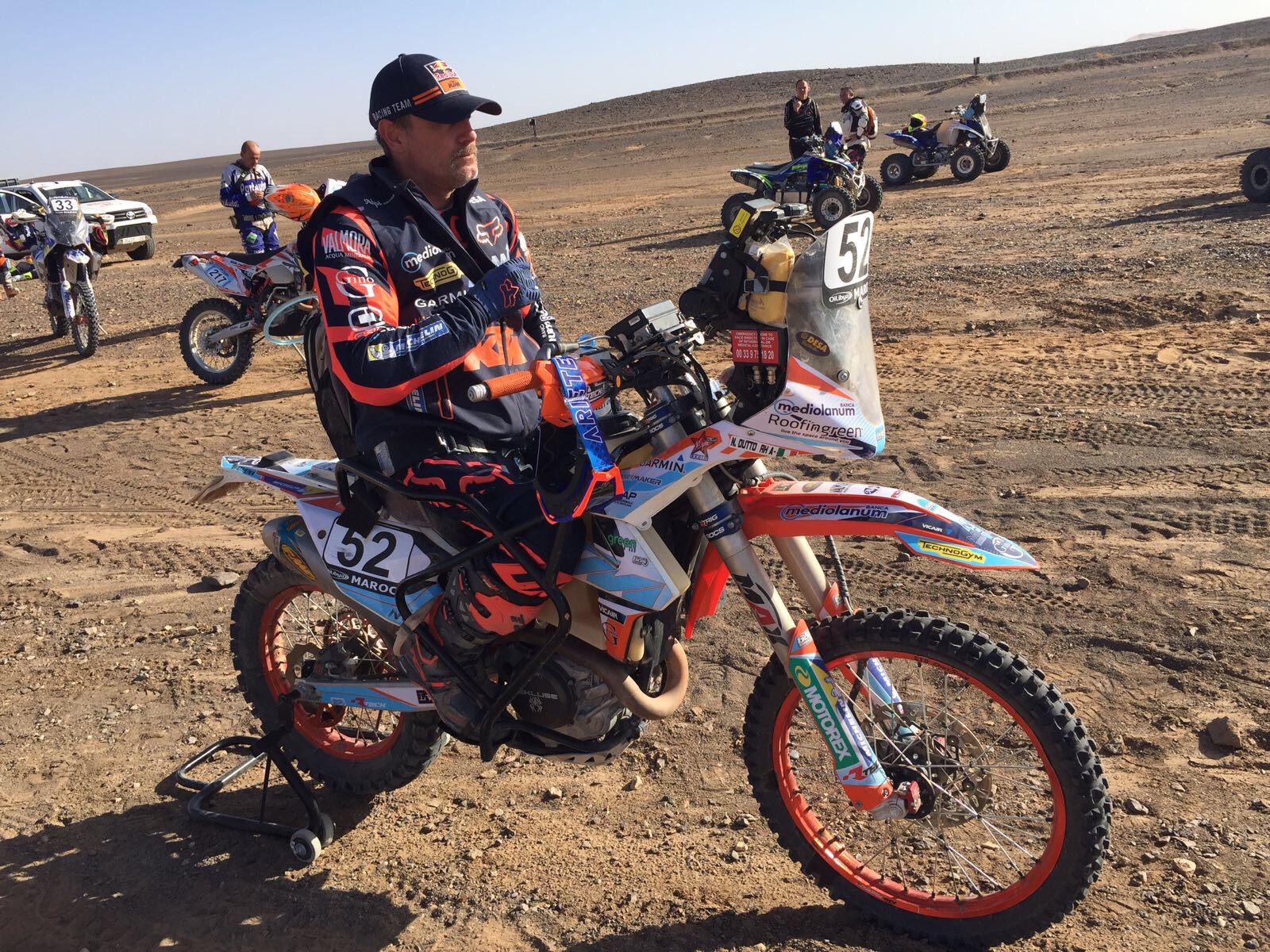 Although Nicola Dutto is out of Rally Dakar 2019, it was not he who gave up.