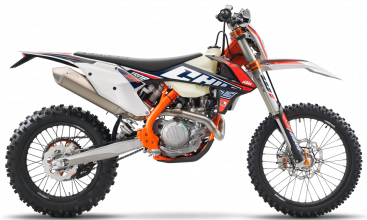 The biggest and meanest horse in the KTM dirt bike stable, the 500 EXC-F SIX DAYS is a salute to the world of offroad racing. Annual special-edition Six Days models boast a selection of specially chosen components and performance enhancements. For 2018, Chile plays host to the International Six Days of Enduro in Viña del Mar, and to honor this, the entire SIX DAYS line-up receives a lick of blue, white and red Chilean-inspired highlight graphics.

The 500 EXC-F Six Days has a fuel tank capacity of 8.5 litres. It weighs 107kg (dry). In addition to this, the bike also comes with an Anti-lock Braking System (ABS).