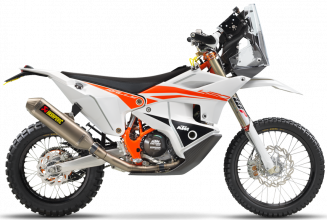 KTM has dominated the Dakar Rally since 2001. To keep the edge, a new factory race bike was unveiled at the 2018 Dakar Rally. For 2019, the same overall design, layout, and features are now available to non-factory riders with serious Dakar, rally raid and cross-country rally ambitions.

The 2019 KTM 450 RALLY Factory Replica is powered by a 449-cc Single cylinder, four-stroke engine that produces bhp and Nm of torque through a 6-speed transmission.

The 450 RALLY Factory Replica has a fuel tank capacity of 8.5 litres. It weighs 139kg (dry). In addition to this, the bike also comes with an Anti-lock Braking System (ABS).