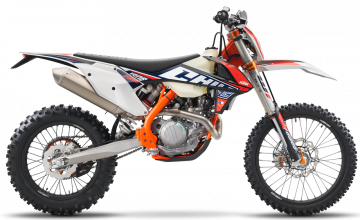 KTM celebrates its prowess in the world of offroad racing with the 450 EXC-F SIX DAYS. Built to perform under the toughest race conditions like those found at the Chilean ISDE, and boasting READY TO RACE componentry, it is well-equipped to take on anything thrown at it.

The 450 EXC-F Six Days has a fuel tank capacity of 8.5 litres. It weighs 106kg (dry). In addition to this, the bike also comes with an Anti-lock Braking System (ABS).