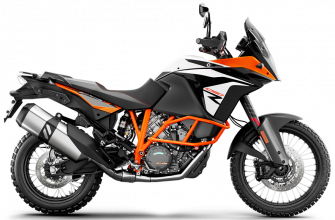 The KTM 1090 ADVENTURE R stares down anything in its path. Its forgiving WP suspension, wire-spoked offroad wheels, and built-to-last 125hp fuel-efficient engine is set to take you further off the beaten track. This motorcycle is KTM’s most offroad-capable ADVENTURE model and uses the same state-of-the-art technology as the KTM 1290 ADVENTURE R. Inspired by decades of rally raid victories it has the genes to handle the wildest adventures.

The 1090 Adventure R has a fuel tank capacity of 23 litres. It weighs 207kg (dry). In addition to this, the bike also comes with an Anti-lock Braking System (ABS).