How Much Can You Customize A Royal Enfield? MÖTO Dubai Has The Answer 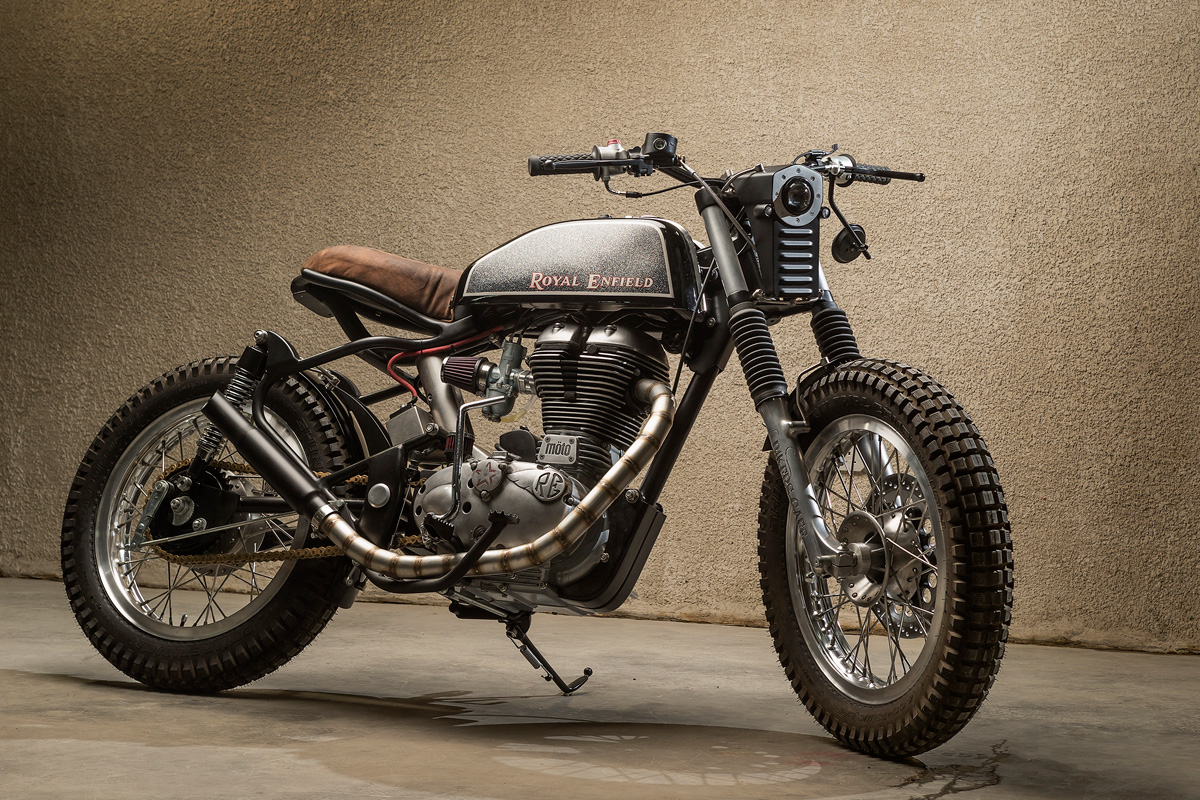 Dubai-based Möto Dubai rose to prominence when it was invited to compete at the Bikers Cafe build-off. The custom house came up with a radical motorcycle that is far removed from the donor Royal Enfield Bullet it is based on.

In a place like Dubai, you come across more exotic cars than motorcycles of any kind. Yet, the bustling desert Emirate is home to a blossoming custom motorcycle scene. It is also the home of one of the most talented teams on the scene: Möto Dubai.

Möto is a relatively young custom house that recently took top honours in the Bikers Cafe build-off with its modified Royal Enfield Bullet 500. The business was conceived when South African Antonie Robertson and German Marco Möller connected over a Honda CB350 Robertson was working on in his apartment. 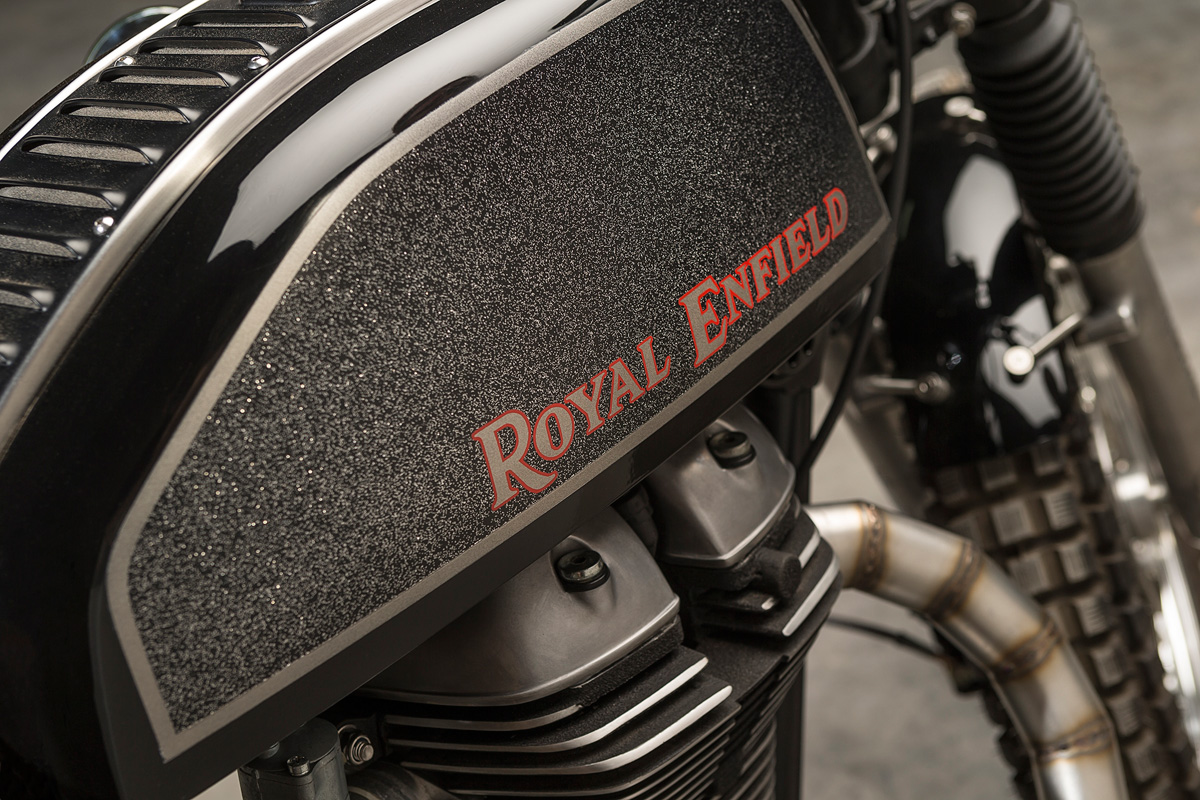 The entire bike is peppered with detailed designs that have you wondering: how much man hours did it take to do all this?

Says Marco of the duo: “I remember Antonie showing up at my house early one day with the frame, and we set about cutting off the tabs and cleaning the welds up in my front yard. I think it was a weekday, and I ended up being late for work. It was total fun.”

When Bikers Cafe Dubai and Royal Enfield UAE donated three Royal Enfield Bullet 500s for a build-off, Möto Dubai was invited to have a go at one of them. Around the same time as the contest, Marco and fellow German Frank Ortmann were in the middle of setting up ‘Möto Space’, which was kind of a workshop and general moto-enthusiast hub. However, it was not yet complete.

For three months, the guys at Möto Dubai worked their day jobs and spent their nights in the half-finished workshop, going over the Royal Enfield Bullet 500. The custom house came a long way with the donor bike in three months.

Read more about the Royal Enfield bullet prices and specs in uae. 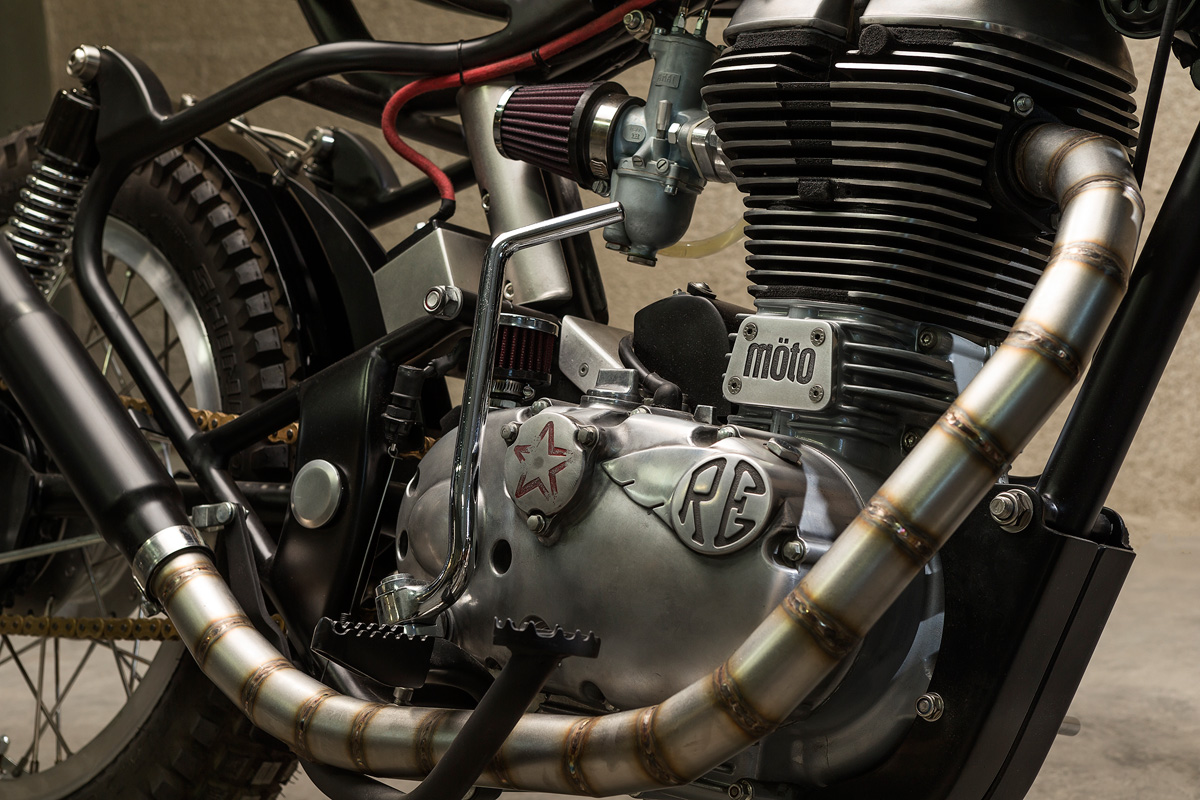 See what we were saying about attention to detail?

The bike was stripped down completely and its frame was detabbed and redesigned. The backbone of the chassis was extended, with a new, exquisite subframe sitting on it. The set of rear lights are new.

The Bullet 500’s factory tank was swapped for a “new old stock” 70s Honda number sourced from the US. Möto Dubai then fabricated and affixed a panel on top of it to incorporate a Motogadget Motoscope Mini speedometer along with the usual tell-tale lights.

All 500cc Royal Enfields come from the factory with an EFI system. The custom house dropped the system and installed a Hitchcocks Motorcycles Amal carb conversion kit. This led to a lot of wiring disappearing, imparting the bike a sleeker, cleaner look. The TCI now sits in a bespoke housing between the swingarm and the engine, while the battery rests in a handmade battery box. The stock bulky ignition switch was retained so the guys could hold on to the original Enfield-branded key. 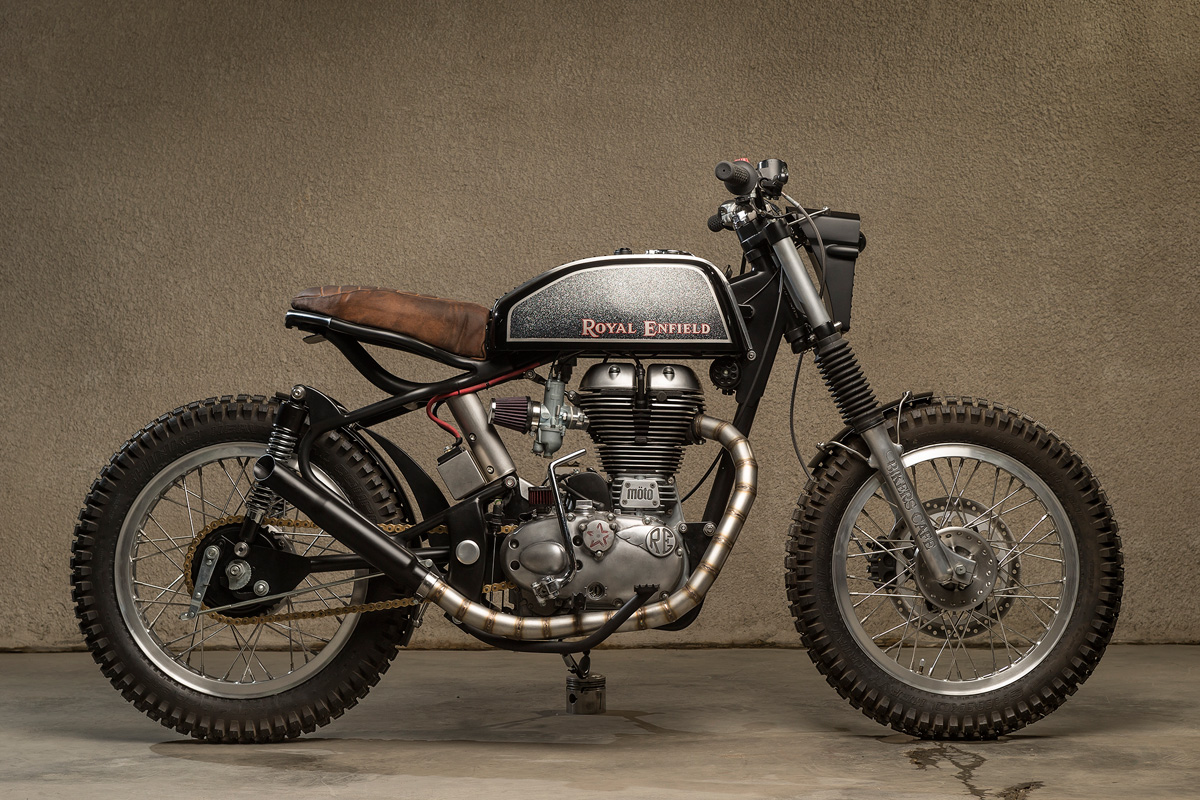 Don’t miss the offset single shock absorber at the back, and the exquisite custom subframe of the Royal Enfield Bullet 500.

Attention to detail is something Möto Dubai really excels at, as evidenced by a lot of design elements that subtly occupy various parts of the bike. For instance, the cooling fins of the engine are hand-filed, painted, and polished again. Marco Möller spent more than sixty hours engraving various bits and bobs of the Bullet 500. To top it off, a classy, stainless-steel exhaust was welded on to the bike.

Möto Dubai then ditched the front end to replace it with a Royal Enfield Bullet Electra front setup. The custom Bullet 500 now gives off a scrambler vibe when you lay eyes upon it from the front. The new set of rear shocks are from Dime City Cycles.

The new 18-inch rims are sourced from Excel and are wrapped in Shinko rubber. Möto Dubai polished the hubs before sending them to be laced with new rims, polishing the rims afterwards for a mixed gloss-matte finish. 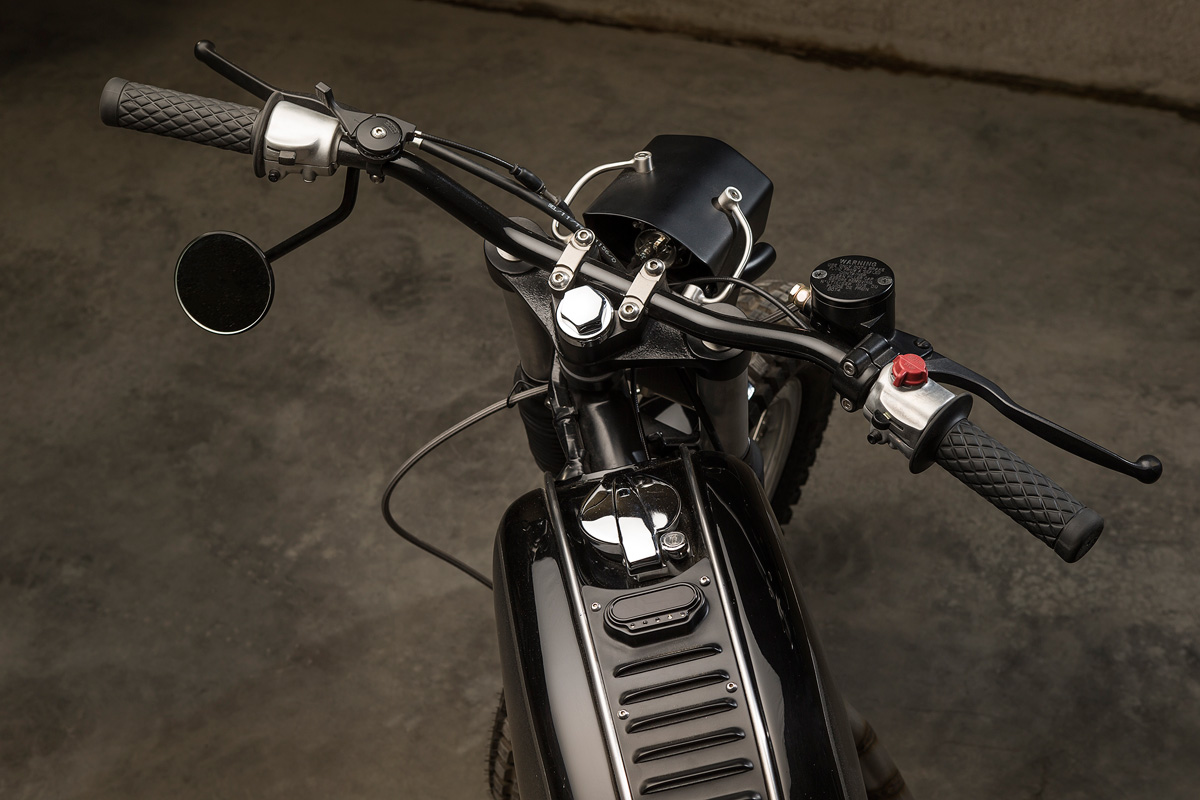 Doesn’t even look like a Bullet 500 from this angle.

Up front, the cockpit is finished off with refurbished Honda CB350 controls, internal wiring, Biltwell grips, and finally, a Nissin master cylinder hooked up to a Goodridge steel-braided brake line.

Möto Dubai’s attention to detail can again be seen at play on the rear tyre hugger, which is completely custom-made. The foot controls consist of bespoke parts welded to the stock mounts, and there is even a hand-made bash plate mounted on the extended engine mount brackets. The seat is finished in a richly hued camel leather cover sourced locally.

That the custom Royal Enfield Bullet 500 took home the first prize is no surprise owing to the painstaking efforts and attention poured into the project by Möto Dubai. However, the project is more personal to the duo at Möto than the build-off. 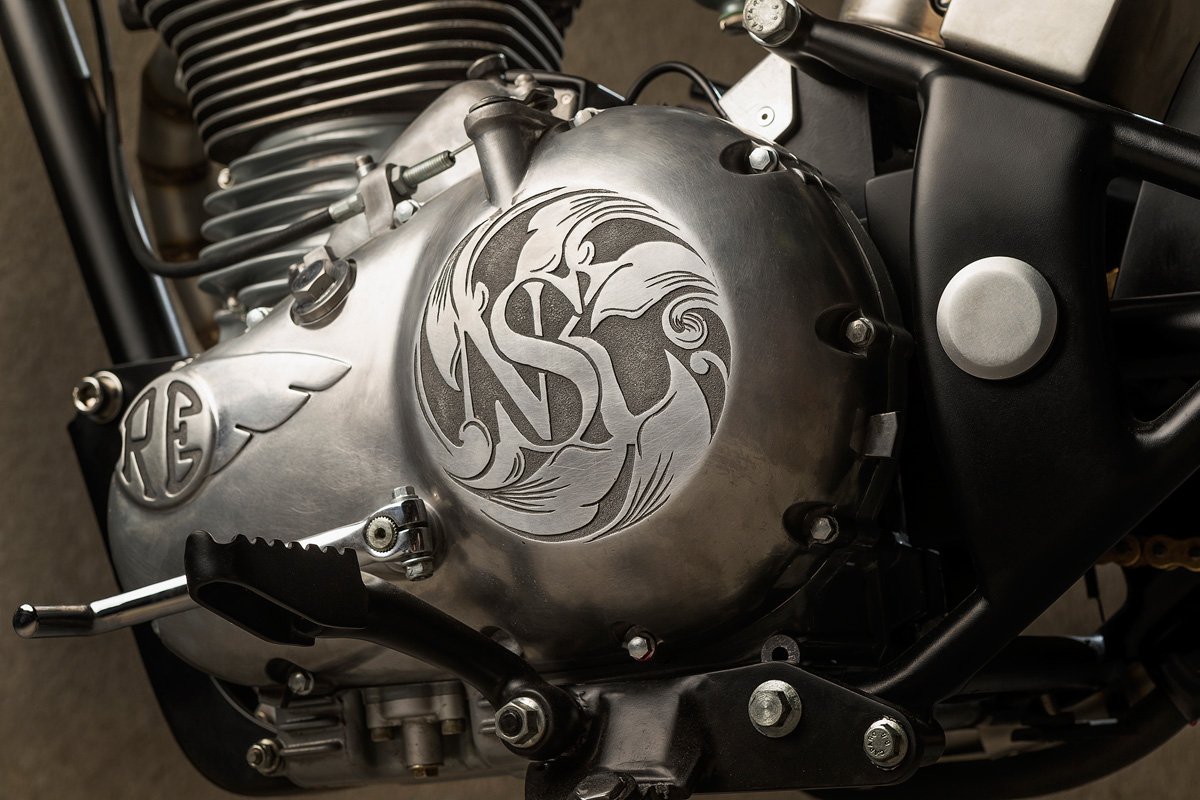 A fitting tribute to a great personality: the Royal Enfield “NSK” Bullet 500.

On the clutch cover of its engine, the Bullet 500 proudly displays the initials “NSK” which stand for Nelson Suresh Kumar. Möller himself engraved the exquisitely designed initials on the cover as a tribute to the man who was widely regarded as the Godfather of the UAE Royal Enfield culture. Antonie explains, “Nelson sadly passed away unexpectedly two years ago. He was a close friend to the growing alternative motorcycling scene in Dubai, and is widely missed by all who knew him.”

Möto Dubai’s custom Royal Enfield Bullet 500 is a fitting homage to a great man, and a bike worthy of the position it secured in the build-off. The name of the custom bike? “NSK”. 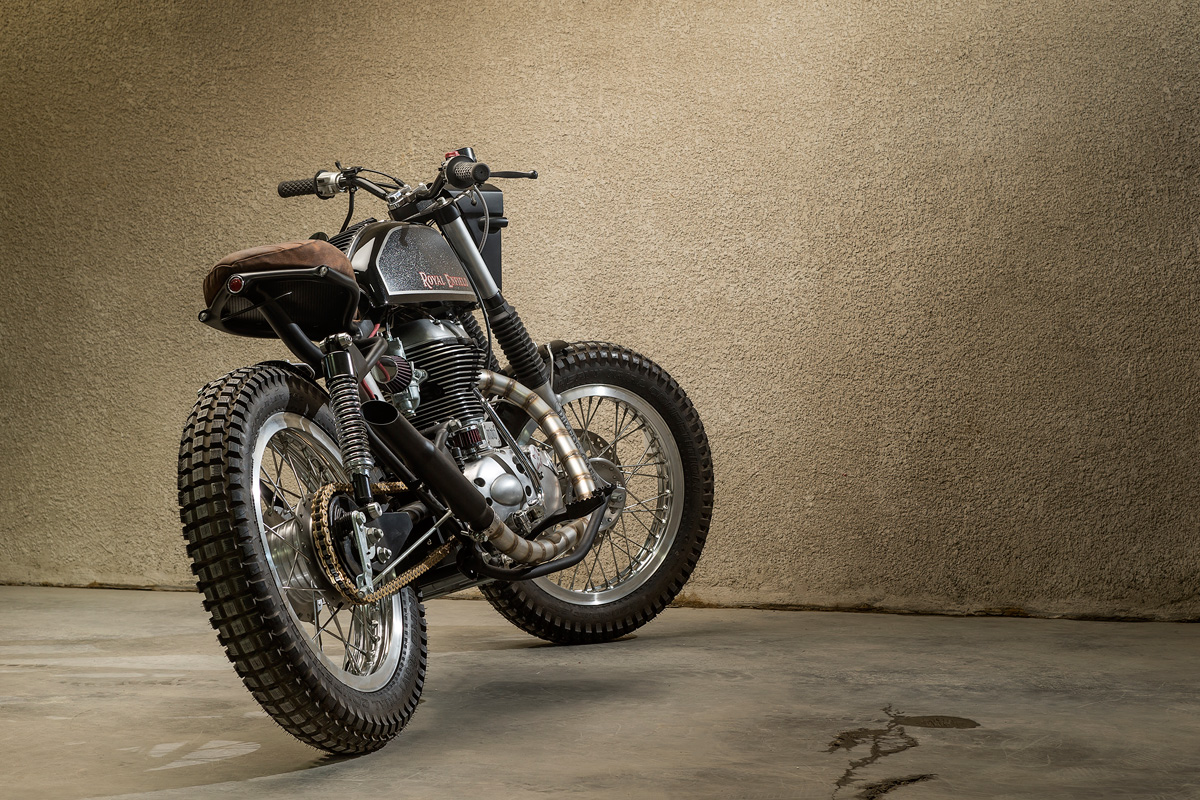 Look at it from any angle, the bike is simply perfect.