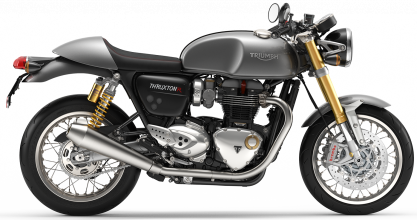 The incredible 1200cc ‘high power’ performance and rider-focused technical capability of the Thruxton is most fully represented by the ‘R’ model, which is equipped to the highest specification with a fully engaged rider position, kicked-up back end, smaller diameter grips and a higher all-round specification of premium equipment.

The Thruxton R takes the modern capability to the next level with the highest specification all round; including twin floating Brembo discs with Brembo monobloc calipers and master cylinder, Showa USD forks, Öhlins rear suspension and Pirelli Diablo Rosso Corsa tyres.

The Thruxton 1200 R has a fuel tank capacity of 14.5 litres. It weighs 206kg (dry). In addition to this, the bike also comes with an Anti-lock Braking System (ABS).