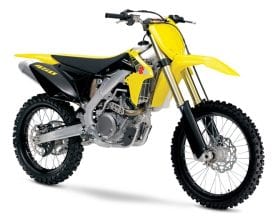 The 2017 Suzuki RM-Z450 features the Suzuki Holeshot Assist Control (S-HAC) system for dominant performance launching out of the gate on virtually any kind of track conditions. After you grab the hole shot, its exceptional power from idle to redline, remarkably crisp throttle response and incredibly precise handling let you dominate the competition.

The 2017 Suzuki RM-Z450 is powered by a 449-cc Single cylinder, four-stroke engine that produces bhp and Nm of torque through a 5-Speed transmission.

The RM-Z450 has a fuel tank capacity of 6 litres. It weighs 247kg (dry). In addition to this, the bike also comes with an Anti-lock Braking System (ABS).