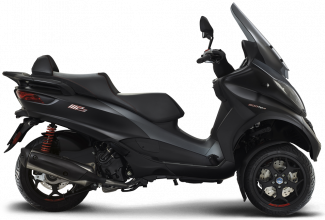 Performance and efficiency are the standout characteristics of the new single-cylinder 500 HPE (High Performance Engine). It boasts an increase in performance of around 14% compared to the previous 500cc, with maximum power of 38.8 hp and, in the three-wheel world, a significant reduction in fuel consumption. The “Ride by Wire” electronic acceleration system optimizes engine operation distribution and flow even at low speed by means of changing the engine map with a mere touch of a button on the handlebar.

The 2019 Piaggio MP3 SPORT 500 HPE is powered by a 493-cc Single cylinder, four-stroke engine that produces 39bhp and 46Nm of torque through a Automatic transmission.

The MP3 SPORT 500 HPE has a fuel tank capacity of 12 litres. In addition to this, the bike also comes with an Anti-lock Braking System (ABS).