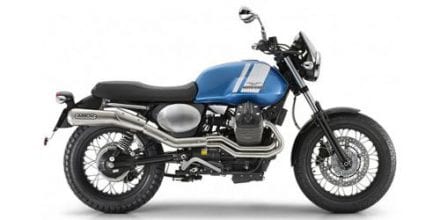 The bike is the perfect combination between cromed and blacked out parts, now also extended to the tail light assembly and the new brake and clutch levers. The final touch are the hand satin aluminum number plates, machined to perfection adding to the distinctly scrambler look.

The 2017 Moto Guzzi V7 II Scrambler ABS is powered by a 744-cc V2, four-stroke engine that produces 48bhp and 60Nm of torque through a 5-Speed transmission.

The V7 II Scrambler ABS has a fuel tank capacity of 22 litres. It weighs 190kg (dry). In addition to this, the bike also comes with an Anti-lock Braking System (ABS).