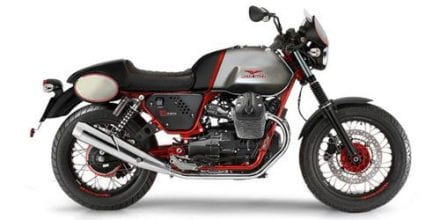 For the first time the Racer will be produced with a satin finished tank, the black/metallic grey paints are matched at an angle emphasized by a red line that is virtually a continuation of the distinctive V7 Racer red frame. In search for a more understated look the “7” has been eliminated from the number plates which now have a satin finish like the mudguards.

The 2017 Moto Guzzi V7 II Racer ABS is powered by a 744-cc V2, four-stroke engine that produces 48bhp and 58Nm of torque through a 5-Speed transmission.

The V7 II Racer ABS has a fuel tank capacity of 22 litres. It weighs 190kg (dry). In addition to this, the bike also comes with an Anti-lock Braking System (ABS).