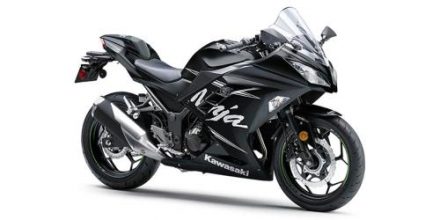 The imposing stealth-like matte black color and graphic scheme is used by the Kawasaki WorldSBK team during their off-season test sessions and features minimal white graphics incorporating a snowflake with the Japanese symbol for winter. The Winter Test Edition allows you to get closer to what factory racers and test riders experience while preparing for the next race season with the Kawasaki Racing Team (KRT).

The 2017 Kawasaki Ninja 300 ABS Winter Test Edition is powered by a 300-cc Twin, four-stroke engine that produces 39bhp and 27Nm of torque through a 6-speed transmission.

The Ninja 300 ABS Winter Test Edition has a fuel tank capacity of 17 litres. It weighs 176kg (dry). In addition to this, the bike also comes with an Anti-lock Braking System (ABS).