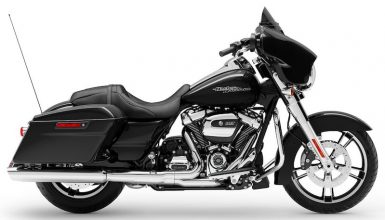 The mould for the factory hot rod bagger was cut the day the Street Glide® motorcycle rolled off the line. It’s spawned imitators, but none measure up. The look is backed up by the refined power of a Milwaukee-Eight® 107 (1747cc) engine. It combines with a fully adjustable rear suspension, responsive front end and Reflex™ linked Brembo® brakes for an unmatched ride. There’s also a BOOM! ™ GTS infotainment OE. It just gets further ahead of the pack.

The 2019 Harley-Davidson Touring Street Glide is powered by a 1745-cc V2, four-stroke engine that produces 89bhp and 150Nm of torque through a 6-Speed transmission.

The Touring Street Glide has a fuel tank capacity of 22.7 litres. It weighs 361kg (dry). In addition to this, the bike also comes with an Anti-lock Braking System (ABS).

Prices in the UAE for the Touring Street Glide starts at AED 125,000.