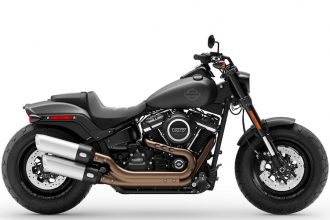 The Fat Bob® is all Harley-Davidson, but at the same time, it’s unlike any Harley® motorcycle that ever existed before. From the modern, aggressive look of its 2-1-2 upswept exhaust and tarmac-devouring fat tyres to the massive torque of the Milwaukee-Eight® engine to the ride of the Softail® frame, inverted front forks and easily adjustable rear suspension, it’s built to shake up the status quo. This is for the rider that wants to break new ground at a high rate of speed.

The 2019 Harley-Davidson Softail Fat Bob is powered by a 1745-cc V2, four-stroke engine that produces 86bhp and 145Nm of torque through a 6-Speed transmission.

The Softail Fat Bob has a fuel tank capacity of 13.6 litres. It weighs 296kg (dry). In addition to this, the bike also comes with an Anti-lock Braking System (ABS).