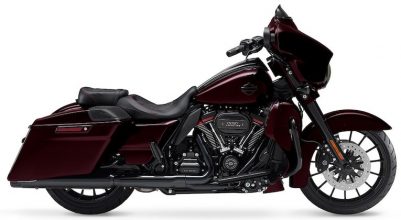 There’s the best, and there’s all the rest. When it comes to custom touring, the CVO™ Street Glide® model is as far up the ladder as you can go. You get the power of the Milwaukee-Eight® 117 (1923cc) V-Twin engine, red rocker covers, premium Talon wheels and custom controls, all-new BOOM!™ Box GTS infotainment with 3 separate amplifiers, 75 watts per channel and 900 watts of clear audio performance. There’s a wireless headset interface that lets you use your Bluetooth® headset to communicate with your infotainment system, passenger and other riders. The list also includes heated grips. We cut no corners and took no shortcuts. In true CVO style, we sweat every detail and then polished it like a jewel. Because some people want to roll bigger.

The 2019 Harley-Davidson CVO Street Glide is powered by a 1923-cc V2, four-stroke engine that produces 105bhp and 166Nm of torque through a 6-Speed transmission.

The CVO Street Glide has a fuel tank capacity of 22.7 litres. It weighs 385kg (dry). In addition to this, the bike also comes with an Anti-lock Braking System (ABS).