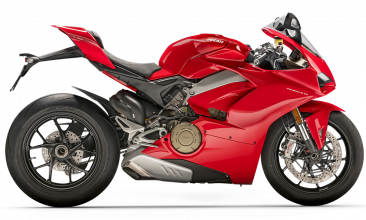 It is called Panigale V4 and it marks a new and important chapter in Ducati´s history, a ´symphony´ of performance and emotions that´s 100% Italian. Panigale V4 is the first mass-produced Ducati motorcycle to be equipped with a 4-cylinder engine, closely derived from the Desmosedici of the MotoGP. battery and a titanium Ducati Performance by Akrapovi and #269; exhaust will take you and 162 kg of racing technology straight to the chequered flag.

The Panigale V4 has a fuel tank capacity of 16 litres. It weighs 175kg (dry). In addition to this, the bike also comes with an Anti-lock Braking System (ABS).