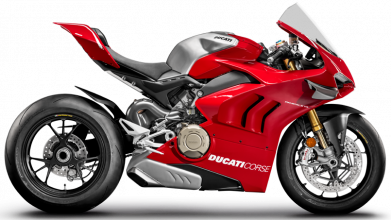 It is the maximum expression of Ducati’s racing DNA, similar to a racing prototype as no other bike: a forward-looking model that accompanies the rider towards a dimension of advanced riding, made up of curves and straights that run incredibly fast, thanks to the electronics that, like an invisible, magical safety net, allows going beyond the limits.

Designed to elicit a symphony of emotions, thanks also to the dry clutch, the new Panigale V4 R transfoms the concept of performance: not only acceleration, braking ability and best lap time, but also safety and ease of riding, whatever the level of experience.

The Panigale V4 R has a fuel tank capacity of 16 litres. It weighs 172kg (dry). In addition to this, the bike also comes with an Anti-lock Braking System (ABS).