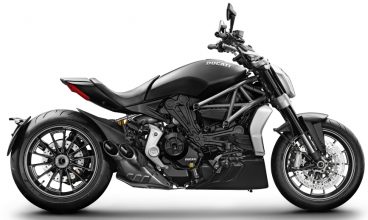 The Diavel project was born when Ducati designers applied their wish-list of a bike´s ´basic instincts´ to a blank canvas. With a ´what if¿´ approach to creating a dream bike, they sketched inspiring forms which became a low, long, sleek and aggressive motorcycle that was born to dominate the boulevard.

The 2017 Ducati Diavel Carbon is powered by a 1200-cc V2, four-stroke engine that produces 152bhp and 123Nm of torque through a 6-speed transmission.

The Diavel Carbon has a fuel tank capacity of 17 litres. It weighs 205kg (dry). In addition to this, the bike also comes with an Anti-lock Braking System (ABS).