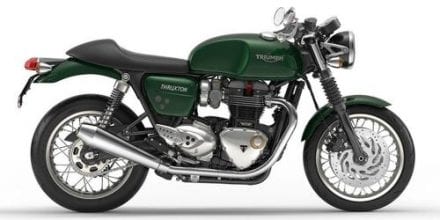 The Bonneville Thruxton returns the legendary café racer to its performance roots, from the power, delivered by its 1200cc ‘Thruxton spec’ engine, to the handling, agility and capability to match its beautifully imposing and authentic Thruxton styling.

The 2016 Triumph Thruxton 1200 is powered by a 1200-cc Twin, four-stroke engine that produces 97bhp and 112Nm of torque through a 6-speed transmission. And is capable of reaching a top-speed of 230kph.

The Thruxton 1200 has a fuel tank capacity of 16 litres. It weighs 206kg (dry). In addition to this, the bike also comes with an Anti-lock Braking System (ABS).