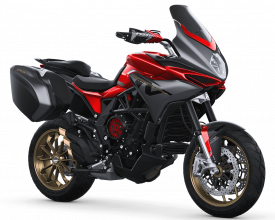 Turismo Veloce 800 Lusso is the model that best represents MV Agusta’s idea of a tourer with no compromises. It introduces the new Smart Clutch system (SCS), an MV proprietary technology that enables the electronic management of the clutch.

The 2019 MV Augusta Turismo Veloce 800 Lusso SCS is powered by a 798-cc Three cylinder, 4 stroke engine that produces 110bhp and 80Nm of torque through a 6-speed transmission. And is capable of reaching a top-speed of 230kph.

The Turismo Veloce 800 Lusso SCS has a fuel tank capacity of 21.5 litres. It weighs 192kg (dry). In addition to this, the bike also comes with an Anti-lock Braking System (ABS).