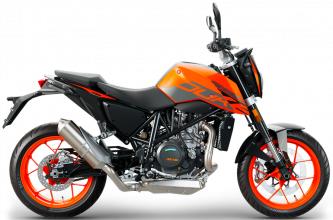 The original DUKE was revolutionary when it was released two decades ago. As KTM’s first single-cylinder street bike, it quickly grew into a cult classic, adding extreme fun to a raw and radical concept. Today’s KTM 690 DUKE is the closest rendition to the original DUKE, but with modern styling, refinements and enhancements. The world’s most powerful single-cylinder production motorcycle stands at the leading edge once more. Long live the DUKE!

The 690 Duke has a fuel tank capacity of 14 litres. It weighs 148.5kg (dry). In addition to this, the bike also comes with an Anti-lock Braking System (ABS).