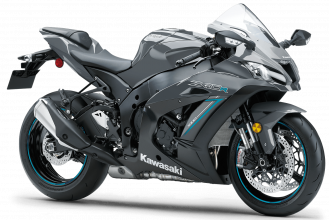 No other super-sport can claim the Super bike World Championship like the Ninja® ZX™-10R. The Ninja ZX-10R propelled Kawasaki rider, Jonathan Rea, to win the championship title for the fourth consecutive year—marking the first time any rider has won four WorldSBK titles in a row. Down to the finest details, everything that goes into the Ninja ZX-10R has the sole purpose of making it the fastest bike on the track. And as a direct recipient of what the Kawasaki Racing Team (KRT) learns, the Ninja ZX-10R is equipped with championship-proven technology that makes it fully capable of also dominating the streets.
For 2019, key updates include an Öhlins Electronic Steering Damper, new dual-direction Kawasaki Quick Shifter, and a more powerful track-ready 998cc engine.

The NINJA ZX-10R ABS has a fuel tank capacity of 17 litres. It weighs 206kg (dry). In addition to this, the bike also comes with an Anti-lock Braking System (ABS).