Building Dani Pedrosa A Street Tracker: Another Day At Deus 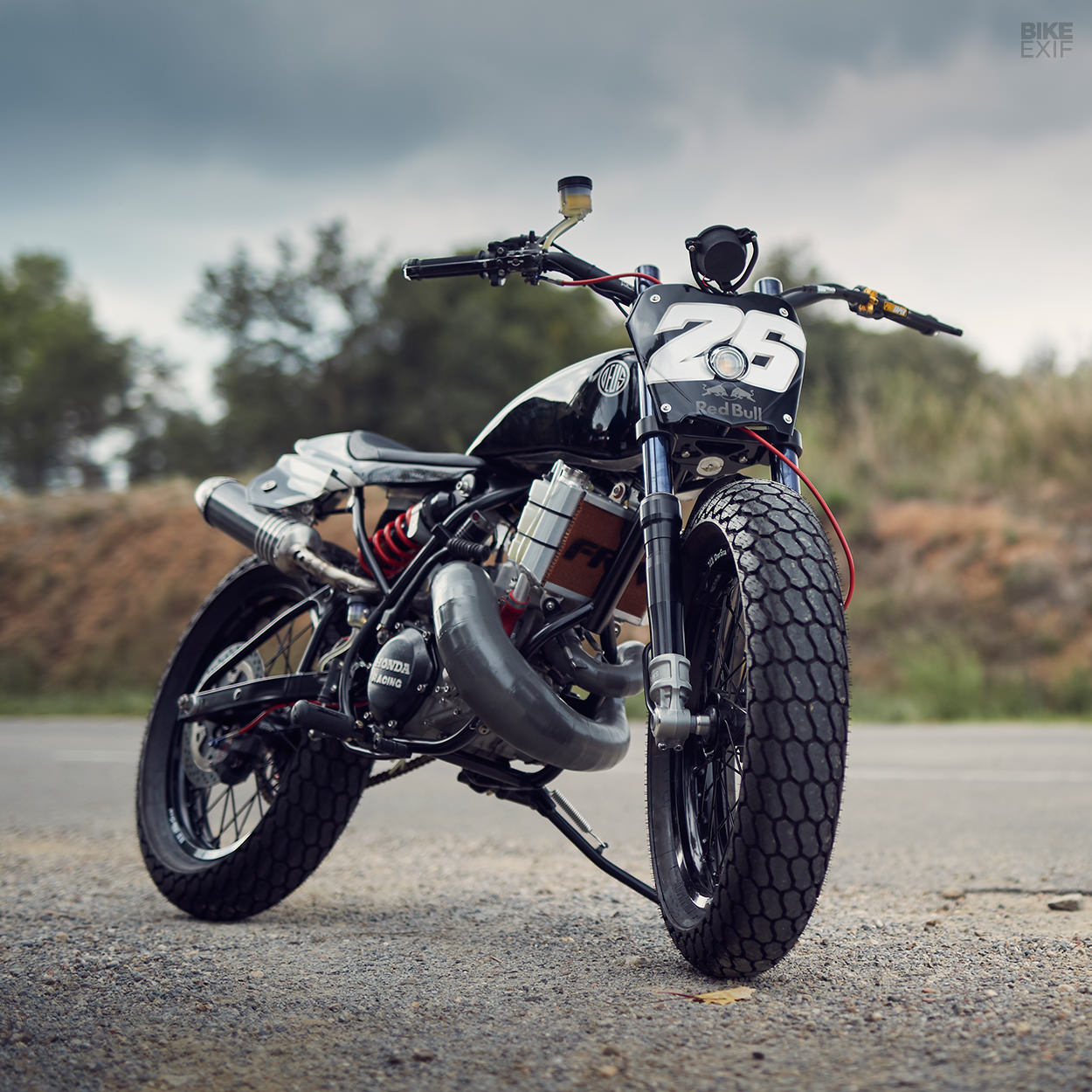 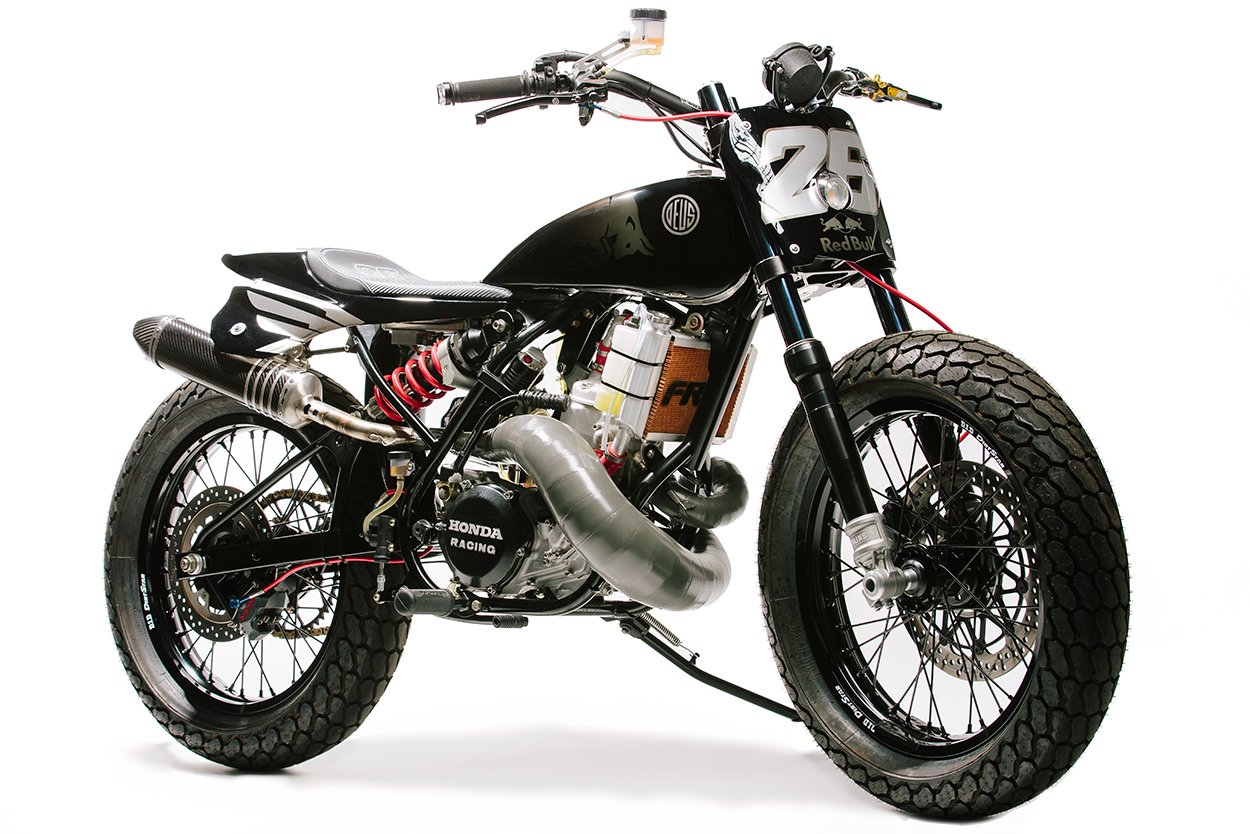 Notice the translucent bull down the tank's side? That's just one of the discreet details this little Honda showcases. 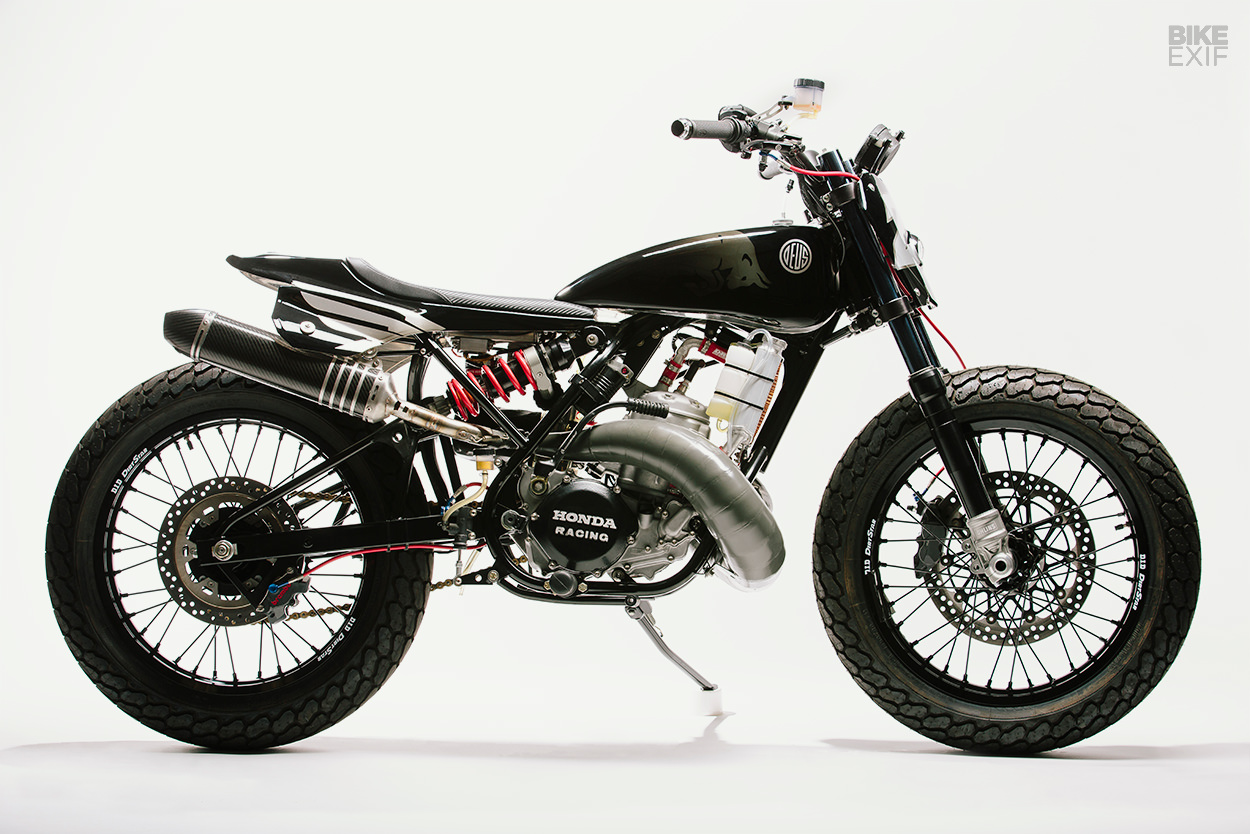 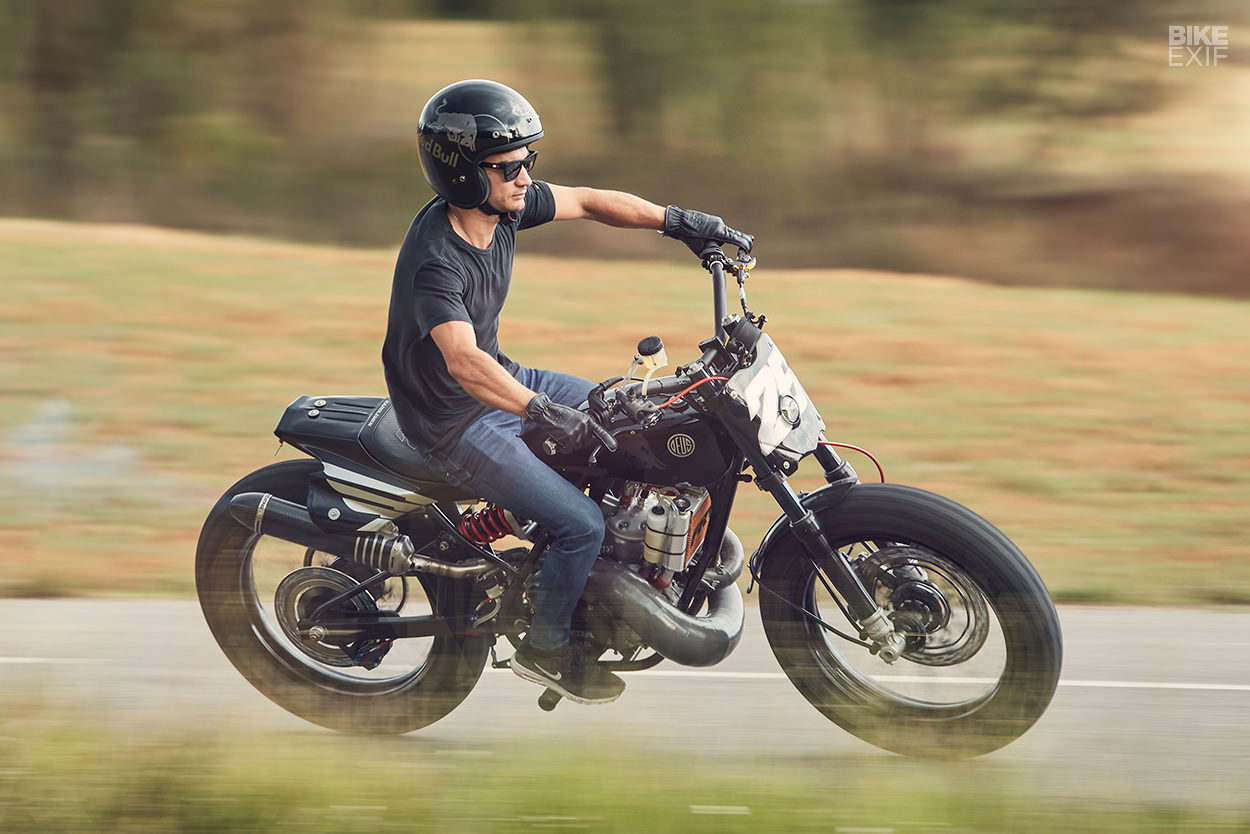 Slide King, they call him. 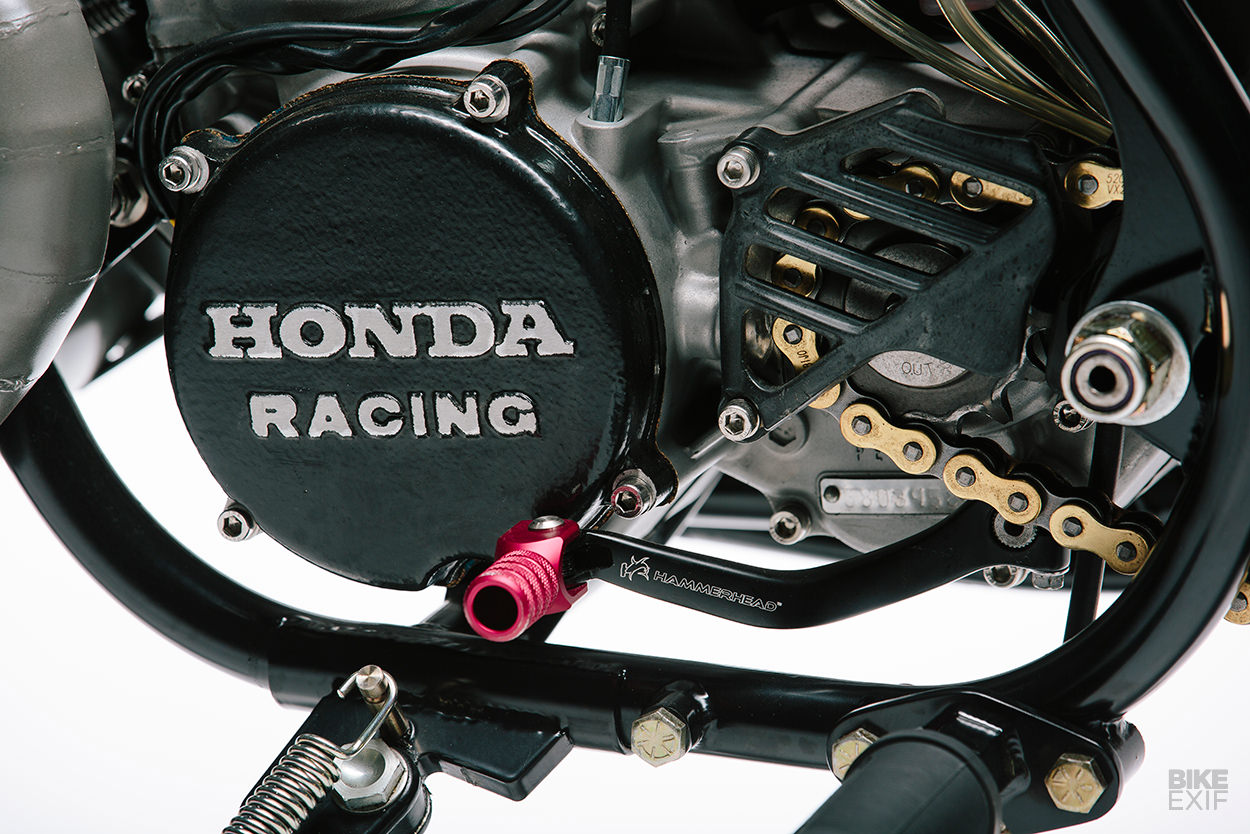 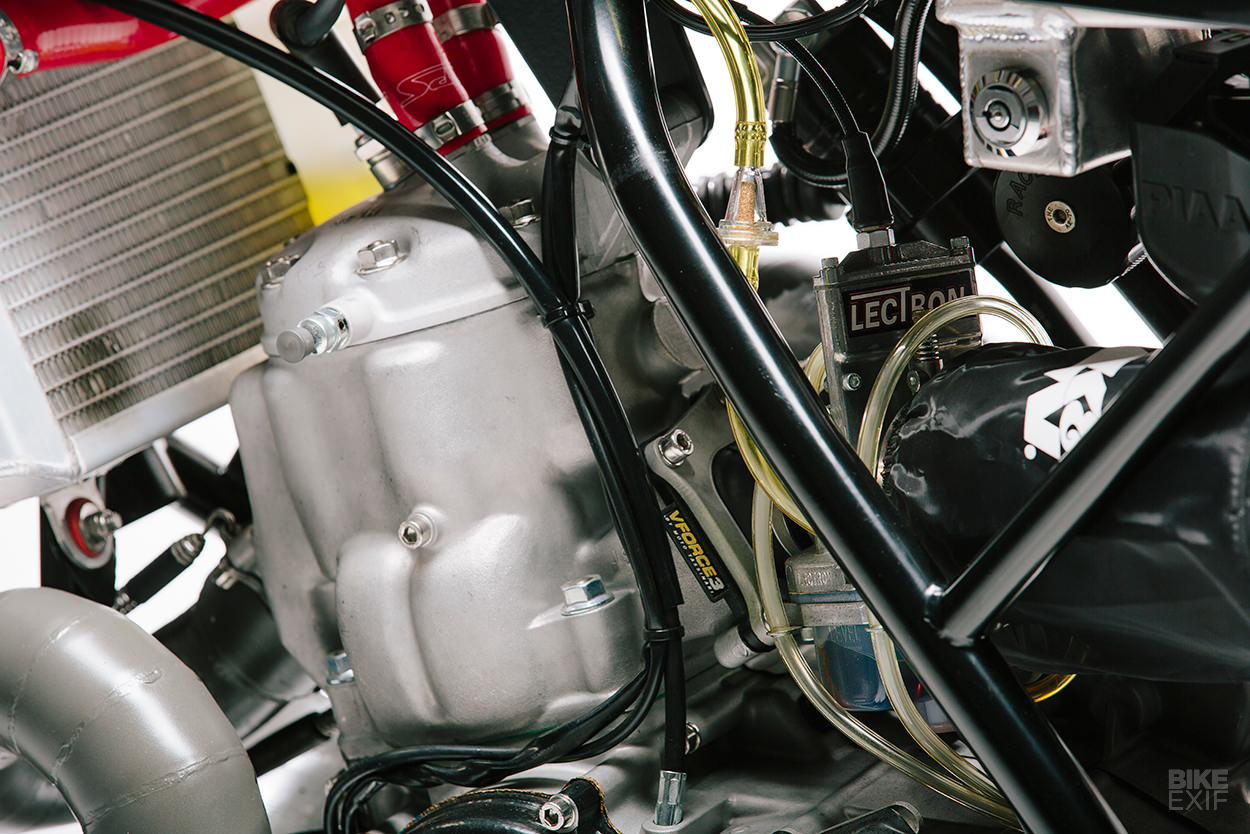 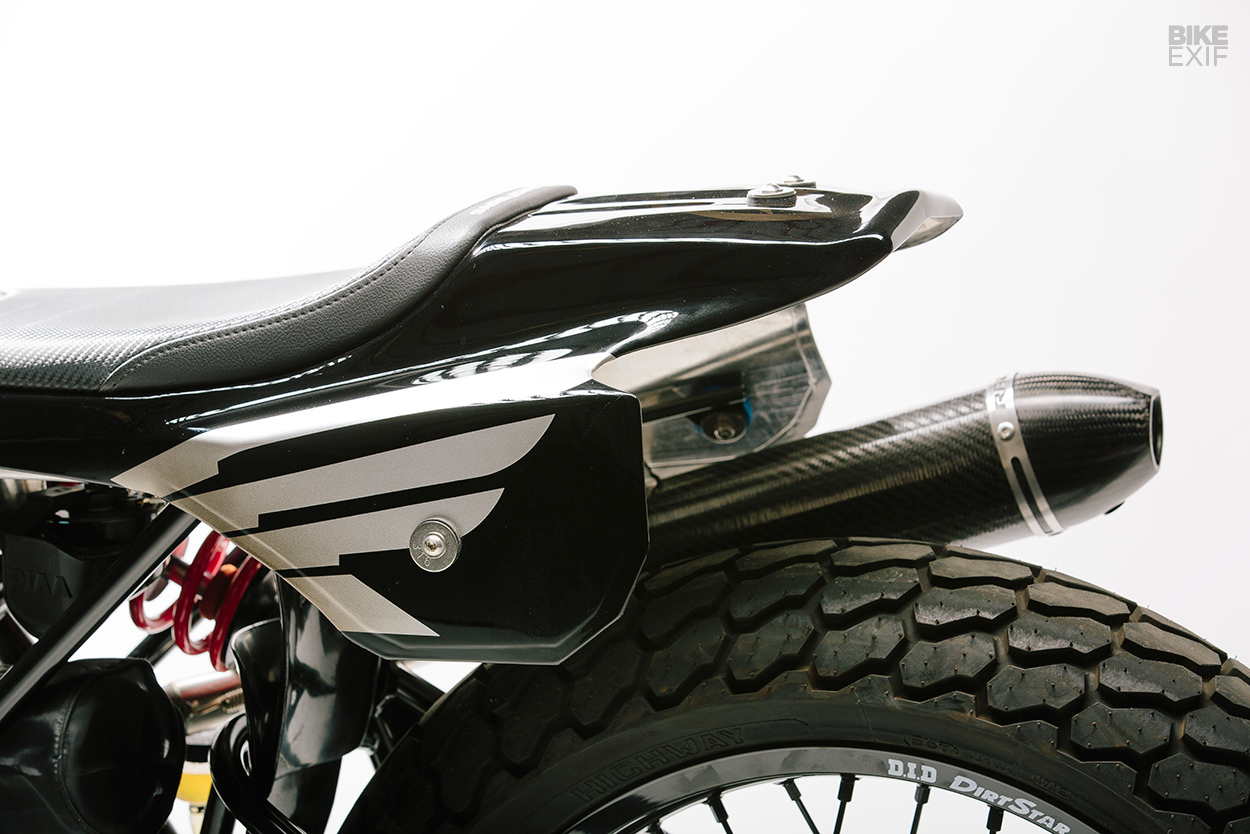 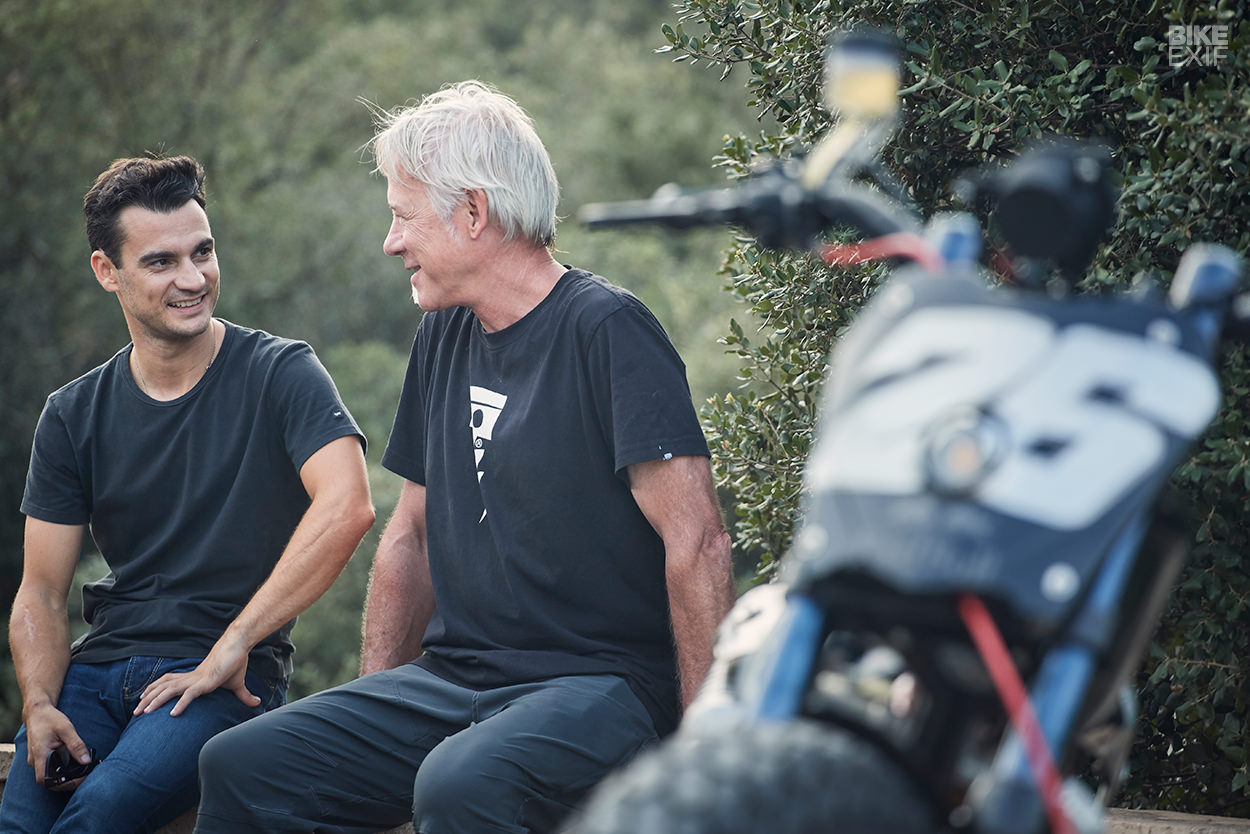 What a pit stop looks like for a MotoGP racer after retirement. 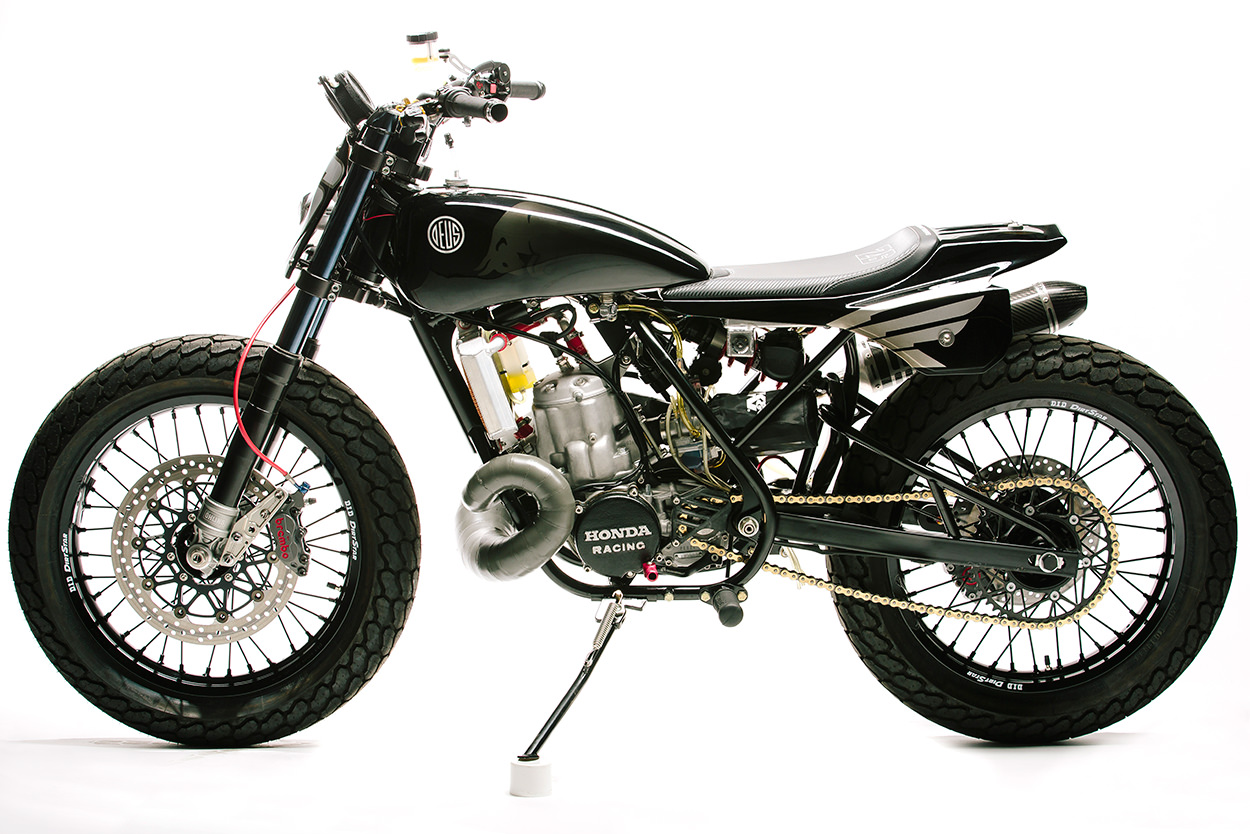 It’s not every day that you see Dani Pedrosa walking through the doors of your shop, looking for a custom build. Then again, if you are Deus Customs, building a custom motorcycle for a champion motorcycle racer shouldn’t give you pause.

The Honda street tracker is a retirement present for Dani, built by Michael Woolaway in collaboration with Red Bull. Woolaway is the head honcho at Deus in the US. The man has an affinity for big motorcycles and is currently equipping a Ducati Hypermotard for his second entry into the Pikes Peak hill climb.

Dani Pedrosa has spent his 13-year-old MotoGP career racing with Honda. So it simply made sense that Woolaway chose a Honda for the custom build. But which Honda? Well, if you keep even a little interest in Big Red’s bikes, you’ll have heard of the CR500. It is also known as a ballistic missile in certain circles, if that helps.

What a pit stop looks like for a MotoGP racer after retirement.

Woolaway did not want the entire bike. He just kept for himself the gigantic 491cc single-cylinder two-stroke engine that made 53hp when new. The engine now rests inside a bespoke chromoly frame. The Honda CR500 wasn’t just infamous for being stupidly powerful – it also was a hellish bike to kick start. Woolaway worked around the issue by raising the port timing.

“The porting was done by Jim Wood,” he said. “Jim’s an old-school motor builder, and still has his notes from the days when he did more than two hundred porting jobs of this type.” The kickstand mount was moved nearer to the left foot peg so Dani could find a solid footing while kicking the CR to life. Woolaway tried the setup himself, and was left with a bruised left foot arch, despite wearing trials boots. On went an automatic decomp cylinder over the cylinder head to solve the problem.

The team also included coils while rebuilding the engine so Dani could install lights. Woolaway also fitted a set of old HRC engine side covers sandcast by hand. Lectron built a custom carburettor for the bike “that laughed at the idea of being affected by altitude.”

Notice the translucent bull down the tank’s side? That’s just one of the discreet details this little Honda showcases.

The cycle parts are thoroughly modern. Öhlins forks held together by adjustable triple clamps, custom Race Tech monoshock out back, 19-inch laced wheels by Dubya in California wrapped in street-legal dirt track tyres – the kit is impressive, and could unlock more of the insane CR500’s potential.

Woolaway hand-shaped the bike’s new bodywork from aluminium. The number board, tank, and tail section bear his workmanship, taking inspiration from classic American flat track race bikes. The seat pad is also a custom number, and has #26 stitched into it. No prizes for guessing what the number stands for.

Every part on Dani’s new daily ride drips with quality. Custom exhaust, handlebars, controls, brakes, simply everything is top-shelf. Since the project kicked off with a fresh frame and motor, all the parts used in between, like brake mounts, are hand-made. The level of fit and finish is typical Deus Customs: top-notch. The dark lick of paint is subtle yet adds character to the Honda. The attention to detail is really noteworthy here – Dani’s race number adorns the faceplate, while the Red Bull logo is ghosted onto the tank. Honda’s wings also make an appearance on the tail section.

Slide King, they call him.

When you think about it, a beastly motor inside a competition-spec chassis could just cost Dani another collarbone. Or it could end up kicking dirt up everyone’s nose in a flat track race should Dani wish so.

“This bike is a bad little bike,” Woolaway says. “It’s not intended for the average rider, as she is a bit of a weapon.”

“But when you’re building a bike for Dani Pedrosa…”

We feel you Michael, and the bike sure looks like a mean little machine.