Britalian? A Remarkable Bimota DB1 From Made In Italy Motorcycles 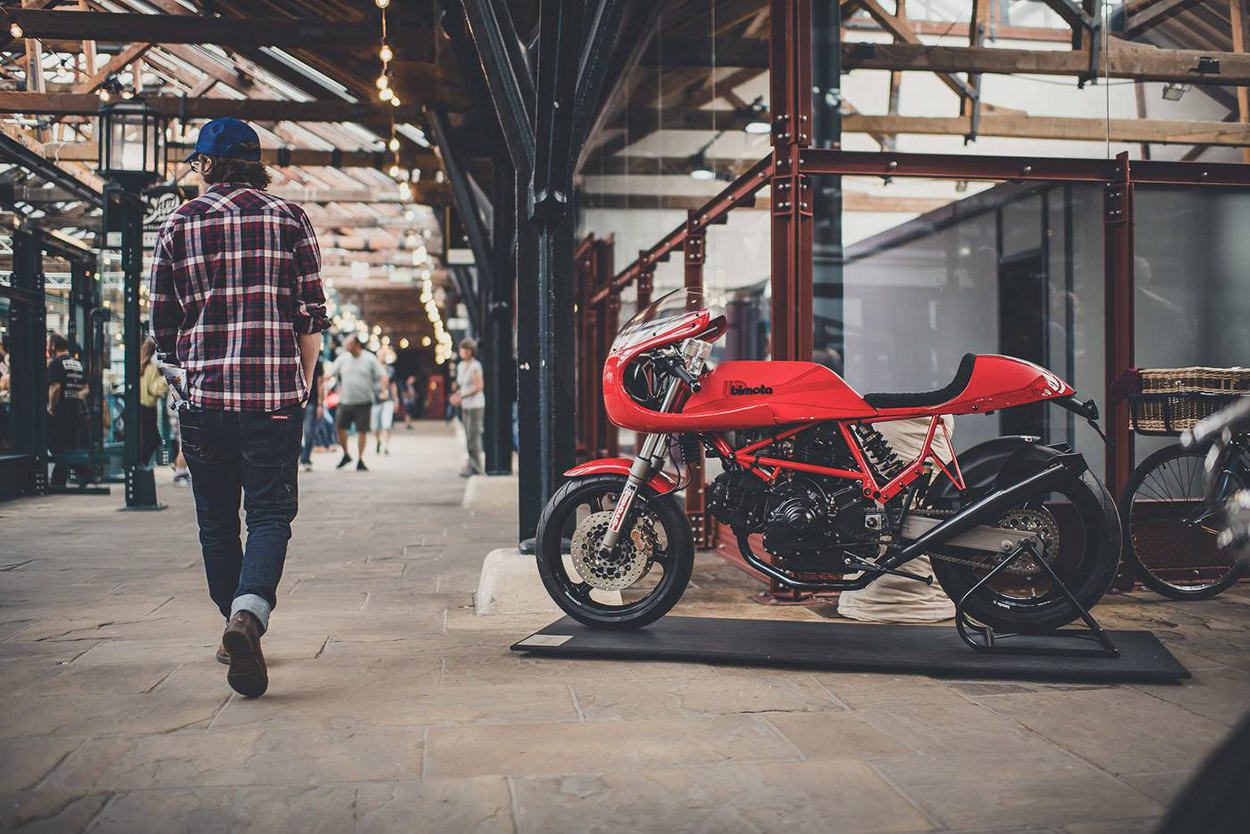 People with a passion for Italian motorcycles almost always keep a certain knowledge of Bimota. The small-scale privately owned manufacturer is famed for building performance machines dripping in quality. This is the story of a rather famous Bimota that found a new lease of life in England.

Bimota has never designed its own engine, preferring to hang potent engines from global manufacturers in the frame the outfit itself designs and manufactures. For years, the firm preferred Japanese engines, until mounting pressure from local fans forced it to turn to Italian companies for powertrains. In 1985, Bimota released its first Ducati-based motorcycle, the Bimota DB1.

The DB1 was an instant hit, using the latest (at that time) Ducati Pantah 750cc Desmodromic V-Twin inside its proprietary chassis. Bimota used a chromoly frame and abundant aluminium parts to keep weight down so the 62hp engine could perform better than before. Marzocchi provided the suspension, while Brembo supplied the braking components; both of them top-shelf of course. The beautiful Bimota kept appreciating in value, nowadays commanding the tag of a collector’s item. 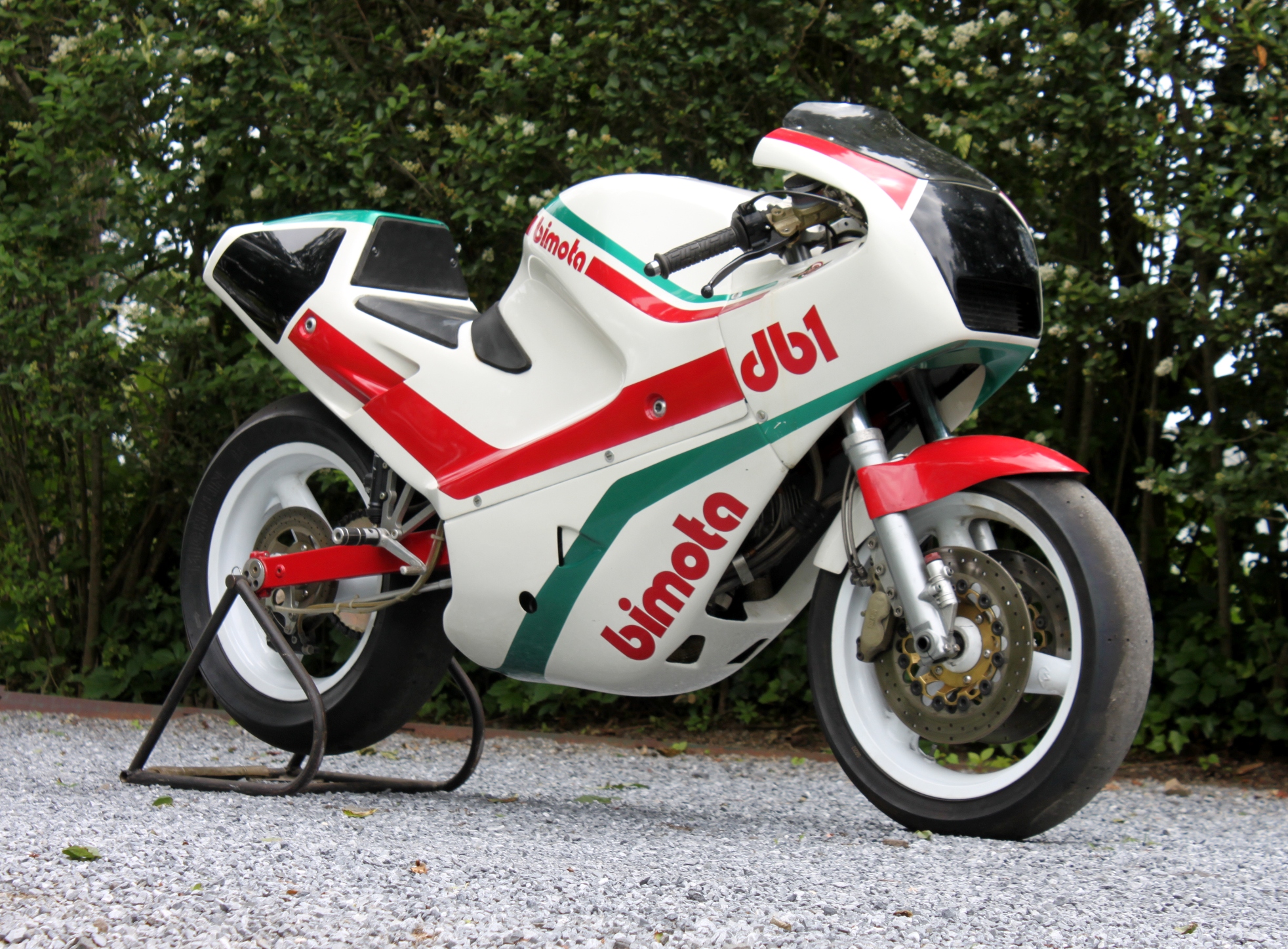 Customising a collectible is a very delicate process. One misstep and you have laid to waste a piece of motoring history and art. Such customizations are best left to the experts, like John Fallon of England-based ‘Made In Italy Motorcycles’. John has had an active involvement in Italian bikes for over 30 years. Let’s just say he knows his Italian machines. When a friend from Germany offered him a DB1 that was subject to a botched mod-job, John instantly got the bike for himself.

“I wanted to build a DB1 to the same high standards as Bimota would have,” says John, “but in a style they may have used if it was conceived in the 1970s rather than the ’80s.” Unlike many of the bikes that he has worked on, the DB1 was a personal project rather than a commercial one. This meant there was no rush to get it done or constraints from clients. “I personally have a real love affair with Bimota DB1’s and a love-hate relationship with the look of them in standard form. So I just built this one for myself”.

John started off envisioning a new look for the Bimota. He had a ’70s style half-fairing and an Imola-inspired fuel tank in mind, with overall styling after the MV 750. He collaborated with his good friend Laurent Amann, owner-operator of coachbuilding workshop, Storik. Laurent is a master of the craft when it comes to aluminium. His portfolio of reproduction vintage fairings was the reason John approached him for the Bimota. Laurent was tasked with building the fuel tank and tail section in alloy, and John sourced a reproduction fibreglass fairing. 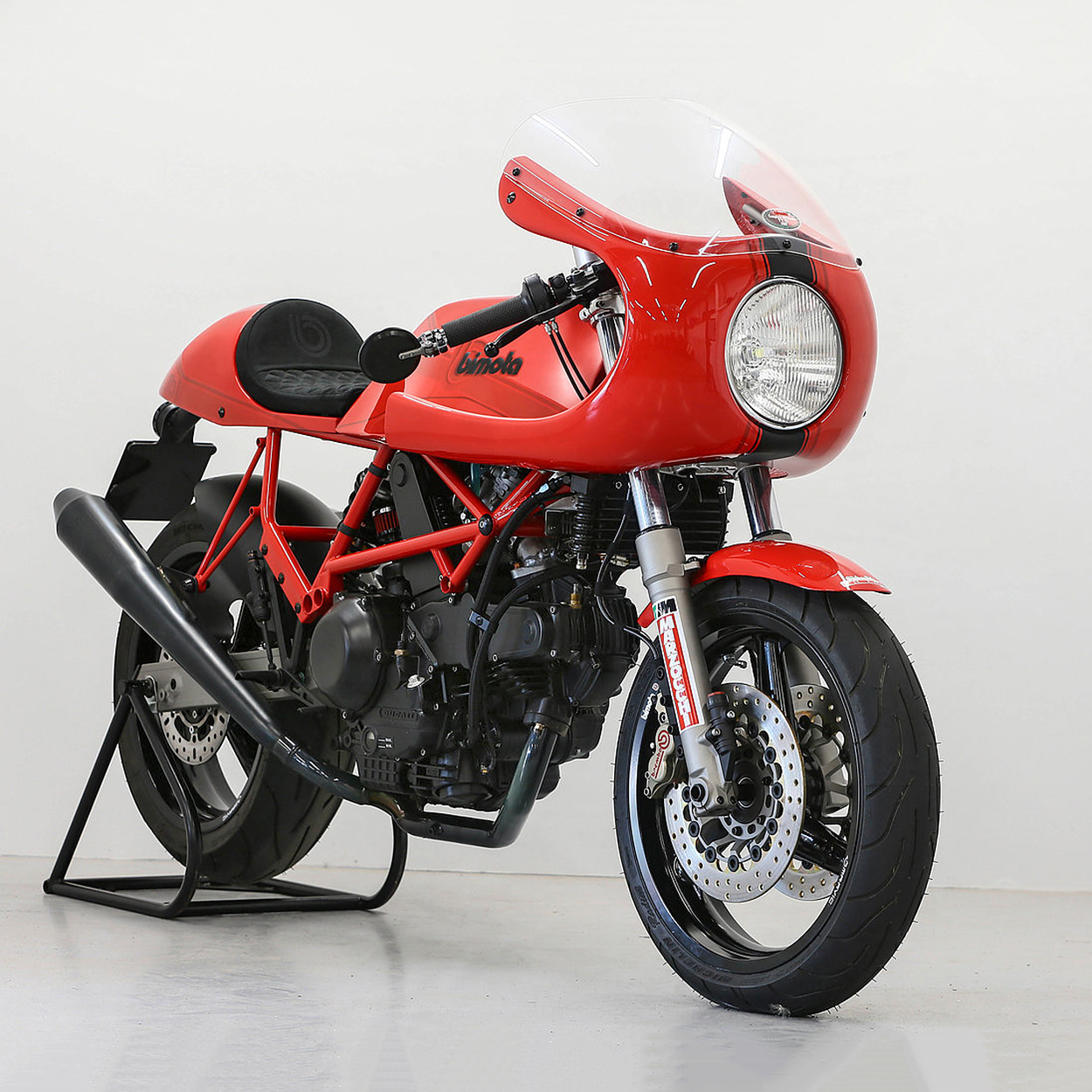 Only the name of the brand ties it to the original bike that served as the donor.

The donor bike had lost most of its factory suspension, engine, and components during its last modification attempt. John, on the other hand, wanted the DB1 to be as close to its original design as possible. He set about sourcing original DB1 parts, the list of which ran rather long. Most of the bike’s 12-month project timeframe was devoted to securing parts and components.

Once John had original parts in his workshop, including DB1 forks, handlebars, reservoirs, and clutch and brake cylinders, he began rebuilding the bike, adding carefully thought-out modifications of his own. The project Bimota now wears a Ducati 888 swingarm suspended from a Wilbers monoshock. The brakes have period-correct Brembo GP calipers and Marvic provided the wheels. Because the new fairing left very little space for period dials, John dropped the idea and went for a Chronoclassic integrated tachometer and speedo from Motogadget.

Although he wasn’t too chuffed with the previous modifications the Bimota had on it, John was all for the 900SS engine that powered it. He used a pair of Ducati 851 silencers to unlock a few more horses and impart the bike an exhaust note that gels with its personality. 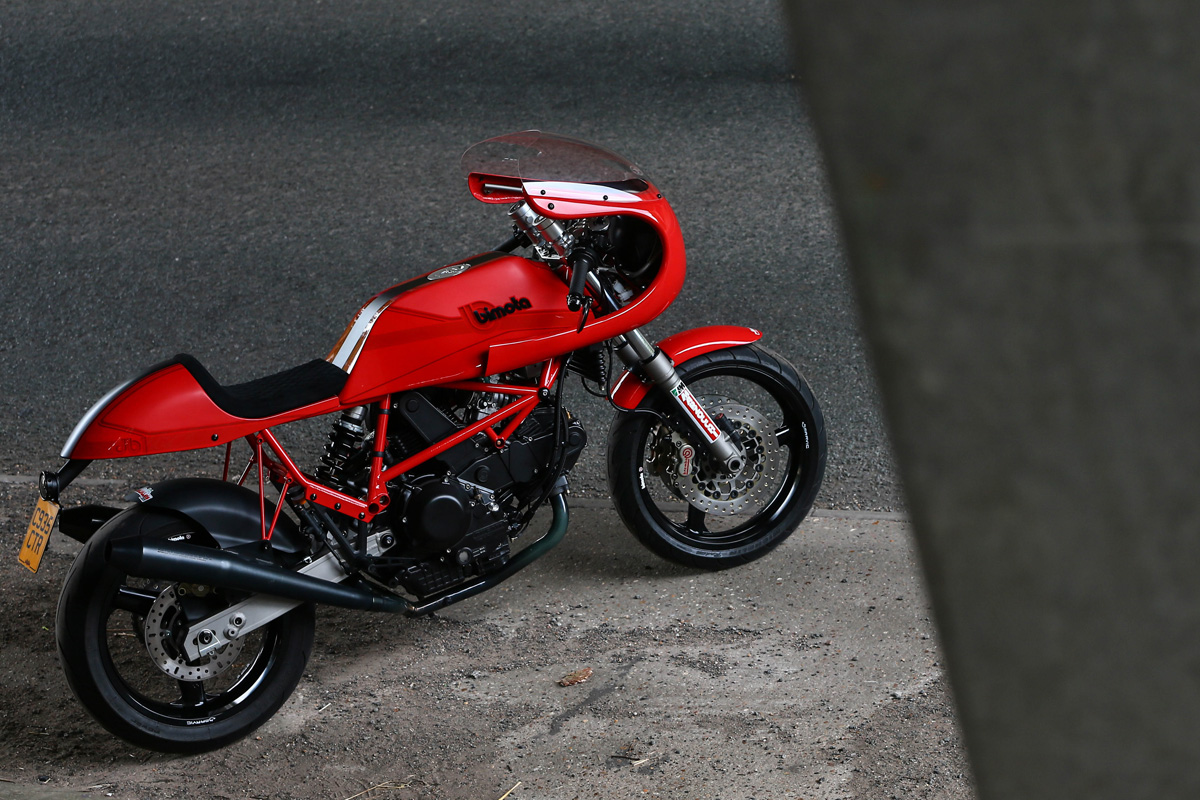 It is hard to find fault with the MIIM Bimota, any angle you lay eyes on it from.

The modification John Fallon did to the Bimota DB1 can pass a cursory glance from a layman as a factory bike with a few modern touches. Which was exactly how he planned it. His DB1 is no longer a collectible, but standing beside the original ’80s stock bike, the Made In Italy Motorcycles Bimota holds much more appeal, hands down. And nothing shouts “Italian” at you louder than the rich, bold red paint the custom wears.

If only we got the keys to John Fallon’s slick Bimota, we would perhaps never return the gorgeous Italian legend to her rightful owner. 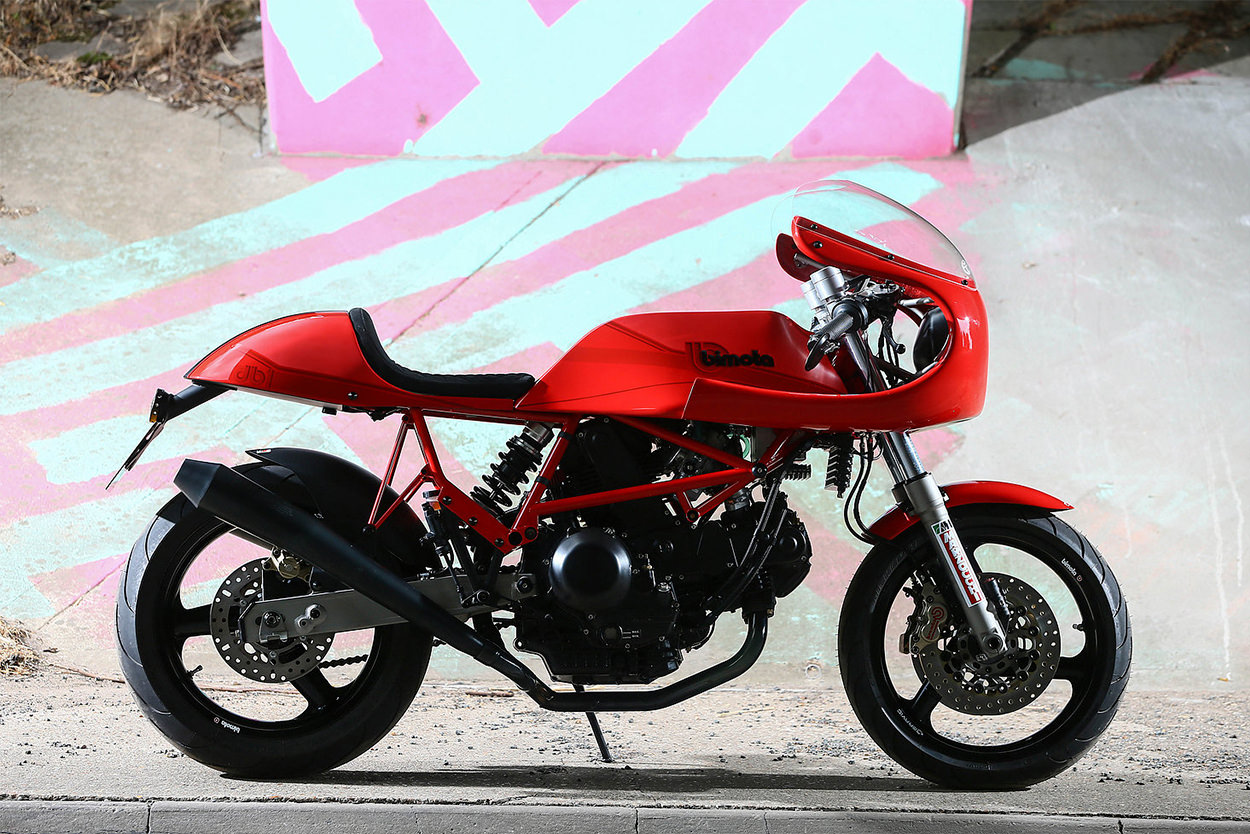 This is how all DB1s should look. Ain’t that right?